In Control or Controlling You?

A small dose of self-criticism is certainly important to personal development, but what happens when we take it too far? 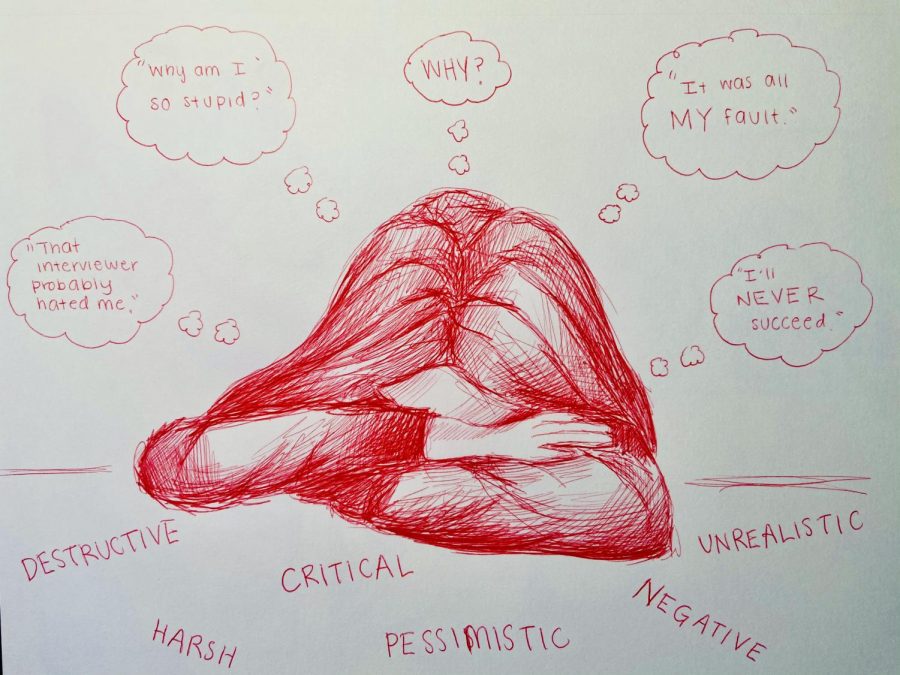 Setbacks are an unavoidable aspect of living, but too often we defeat ourselves by magnifying their importance.

You’ve had a crush on a close friend for the longest time. But after confronting them, they admit that staying “just friends” would be the better option. You mentally beat yourself up and think, “There must be something wrong with me. I’m ugly and unattractive. I’ll be alone forever. No one will ever like me.” You fall into a cycle of despair and confusion.

The interview for your new job begins, and your hands sweat like crazy. As your brain runs through the potential questions the interviewer could ask you, everything freezes. You can’t remember the well-rehearsed answers you prepared ahead, and you feel as if you babbled through the entire interview. Afterwards, you tell yourself, “I must have sounded like a complete idiot. He definitely hated me. I suck at everything. I’m an awful person.”

I’m sure most of you, if not all, have experienced some sort of situation much like the ones above. You were unsuccessful at achieving a task, or something didn’t go as smoothly as planned. Later, you spend hours scolding and demoting your self-worth, leaving a negative aura on your outlook.

Honestly, I am guilty of it, too.

Generally, we improve upon ourselves when we step out of our comfort zones and explore challenges. Discomfort and uncertainty are natural, and with a mature attitude, positive pressure can be the most crucial factor in achieving success.

According to Richard Davidson, founder and director of the Center for Healthy Minds at the University of Wisconsin-Madison, “Our brains equip us with a mechanism to monitor our mind and our behavior.”

Davidson argues that evolution has wired our brains to become more conscious of our actions.

“In order to recover,” he said, “we first must notice that a mistake has occurred.”

Now, that is definitely a good thing. If I’m practicing piano for my next performance, and I realize that I keep faltering at a certain section with harder chords, I know to put more time into going over that area of the song until it sounds proficient. The voice inside my head reassures me, “It’s alright. Just keep practicing, focus on your hands and rhythm, and eventually the notes will blend together harmoniously.”

However, pondering too intensely on this “critical inner voice” can be dangerously deceptive, and more times than not it works to defeat us rather than make us better versions of ourselves.

Recently, I’ve noticed a particularly widespread outbreak of self-criticism. Many of my friends have been applying for interviews for jobs and colleges, yet even the smartest and brightest among them downgrade their abilities and complain about how “stupid” they are after a not-so-hot experience.

Negativity often overrides the positive feelings we have towards our actions. It seems as if it is human nature for us to fixate on minor, daily mistakes and label ourselves as “inadequate.” Every little flaw is magnified in our minds to appear far more consequential than it really is.

Being reasonably self-aware is beneficial. But being overly self-destructive and attacking ourselves is destructive. Instead of trying to land back on track after a disappointment, all to often we succumb to persistent worry and self-bashing.

These negative values, says Davidson, will “ensnare” us into a “cycle of unhelpful rumination” and “impact our bodies by stimulating inflammatory mechanisms that lead to chronic illness and accelerated aging.”

According to Forbes Magazine’s Brianna Wiest, who writes regularly about emotional intelligence, the ones who learn and grow from their journeys are different from those who fall victim to their faults, as the former group is able to “approach the edge without falling off it.”

So let’s loosen up a bit. Sure, keeping reach for your goals and nurturing a healthy degree of self-awareness.  Just don’t forget that no one’s judgement will affect you more than your own.