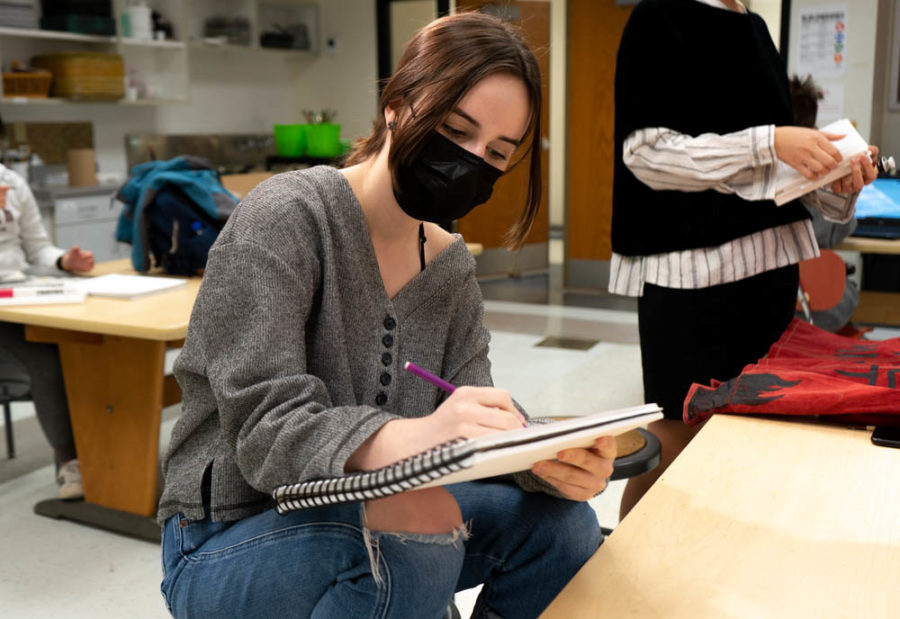 Réka Götz is not your average, run-of-the-mill high school art student. While many of NASH’s students who study art are full of talent and aspiration, there may be none more talented than Götz.

Götz is an 11th grader at NASH with a passion for visual art. She has achieved what most artists only dream of — a unique and personal art style reflected in every piece. From drawing to painting to film and photography, it is fairly easy to identify her works as her own.

She has currently received 14 awards through the Scholastic Art and Writing competition, including an American Visions nomination, a silver medal, and six gold keys. She is currently planning to continue pursuing art in college and hopes to work in an artistic field after graduation.

“I don’t think I’ve ever thought to pursue a career in anything other than art,” Götz said. “People have always given me their two cents about becoming a starving artist, but honestly I would rather starve myself trying to pursue what I love than starve my brain trying to conform.”

Götz recently gave The Uproar the opportunity to learn more about her inspiration.

“I took this photo at The Vessel, a public art structure in Manhattan. Climbing up the spiral staircase inside was a very cool experience and made for a lot of nice pictures!”

“As of now, my top school is UAL, which is in London. I have a list of about five schools, but I really hope to end up in a big city,” Götz said.

Featured below is one of her sketchbook entries that was done as a part of a class assignment.

“I like to experiment with multiple disciplines when working in my sketchbook,” she noted. “The thumbnail drawings are from work I did in a graphic design apprenticeship last year. I basically assembled some of my preexisting work onto a spread, and not a single part of it was premeditated, which made it a lot of fun to create.”

“This is also one of my sketchbook assignments that I made for class,” she said. “It’s really just a bunch of random observations that I squeezed onto a spread. I like to treat my sketchbook as a place for creative exercise. It’s really no different than practicing an instrument to stay proficient; I find that the more I draw in it, the more inspired I am.”

“I thoroughly believe that anything and everything can provide inspiration,” Götz added. “Normally just analyzing the things in my day-to-day experiences, like a conversation or a cool bug, is enough to get the juices flowing. I think the key to coming up with creative ideas is staying inquisitive and open-minded.”

“I took this photo of the famous cube houses in Rotterdam,” she said. “Whenever I go somewhere new, I try to document as much of that place as possible. Pictures like these are great resources for me to study and use in my artwork because they show a piece of the world through my own perspective.”

And on the topic of perspective, Götz shared what drives that perspective and her personal style.

“I feel as though good art tells stories that can’t be fully translated into words,” she explained. “So many elements of a memory, like the atmosphere of a place exactly at noon, are so significant, yet so hard to portray through language,” she said.

“This painting, ‘Assimilate Me,’ was done for an assignment in art class. I used the shattered nesting doll as a metaphor for the unreasonable expectations of those living in America, especially those that aren’t originally from here.”

“I find it harmful that Americans want everyone living in the country to act or dress a certain way in order to satisfy their perceived notion of what a U.S. citizen should be,” Götz said. “Because of this, foreign people and minorities are often pressured into shedding their own cultures that have made them who they are. ‘Assimilate Me’ won a gold key and the American Visions nomination at last year’s Scholastic Art Awards.”

Götz expressed that not all of the projects in art class allow for as much creative freedom, but in her view, such constraints can be helpful.

“I definitely appreciate restrictions in moderation– without a prompt, it’s easy to lose direction,” she said. “Art class can be really valuable in developing new skills and limiting my creativity in a way that reflects real-world design work,” she said. “However, I find that NA ,in general, has placed less and less importance on creativity as I have gotten older, which is frankly problematic. With more pressure on students to challenge themselves with harder classes, the lack of diverse thinking and enthusiasm in creative classes has seemed to have a negative impact on student engagement.”

Götz has been trying to focus on her creativity more outside of school because of this.

“I drew this face as an attempt to teach myself how charcoal worked,” she explained. “Before drawing this, I had virtually no experience with charcoals and saw how effective they can be in creating realistic portraits. I still have a lot to learn, but I enjoy the versatility that comes with this medium.”

“Recently, it’s becoming more and more important to me to be creative on my own because my creative urges are repressed in school,” Götz said. “I also feel as though projects that aren’t influenced by art class reflect your process more honestly, which is important for colleges to see in a portfolio.”

The photo below is a case in point.

“I took this photo of two friends in The Mattress Factory museum,” she explained. “I love the way that the blur in the silhouettes creates a sense of motion. It’s almost as if this photo was a still from a music video.”

Götz also spoke about her future in the creative field.

“The most specific I can be in defining my ideal career right now is within the field of design,” she said. “Through several years of art class, I learned that I am much better at coming up with ideas than producing fine art. I tend to go through month-long phases where I convince myself that I’m going to get into fashion, or film, or graphics, but an important constant in the design field is creative problem solving.”

For Götz, creativity is the constant that will guide her in whatever career field she eventually chooses.

“I think I’ve always been aware that my creativity is something that I need to feed to stay sane,” she added. “It’s part of my life! I don’t think I could survive without doing things like doodling on napkins or storyboarding my dreams. But what I tend to find myself focusing on is trying to share my own experiences by illustrating these nuances instead of describing them.”

Below is one variation of a personal project that Götz created.

“This was a lot of fun to make,” she said. “It’s a playing card based off of a Hungarian folktale. I used symbolism on the front of the card to reflect important aspects of the story, which describes a lonely hedgehog that outsmarts three old men and becomes a king. I created the playing card digitally and then had a fun photoshoot with four color variations of the design.”

Götz is continuing to create stunning artworks and hopes that her artistic career will reflect all of the hard work she has put into defining her craft. For fans of art, and those who like to be inspired, Götz’s work is a great source of talent and potential.

“Art has made my life a thousand times more interesting,” she said. “For me, creating good art has always worked in conjunction with staying more in touch with my surroundings. Being artistic allows me to live more spontaneously because I find that there is absolutely zero creativity in doing the same thing every day.”