A Happy Ending to a Tragic Story 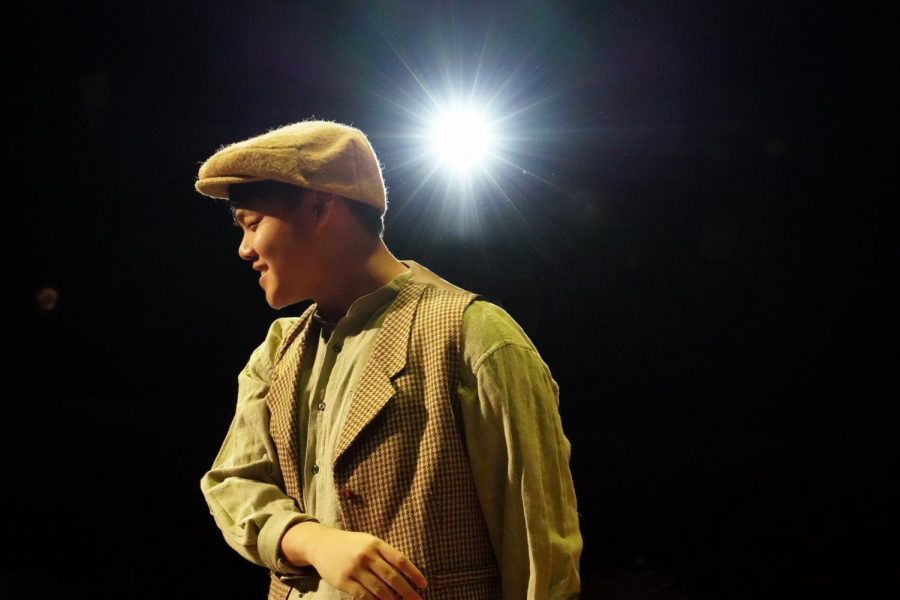 Ensemble member Marvel Moniaga makes the most of his moment in the spotlight at last weekend's spring musical, "Titanic."

The Titanic set sail on her maiden voyage 108 years ago. 1,517 passengers boarded the ship, not knowing their tragic fate. From March 4-8, the Titanic sunk in NASH’s own auditorium, and 5,800 people were there to witness it.

Around 170 students boarded the Titanic as cast members, pit orchestra, and stage crew. Titanic: the Musical told the true stories of the ship’s passengers and the engineering marvel of the boat itself, as well as the tragic events on the evening of April 14, 1912, when the “unsinkable” Titanic struck an iceberg and sank to the bottom of the Atlantic Ocean.

More than 68 student actors, singers, and dancers portrayed the 1,517 passengers on board the Titanic.  The last to board the ship were the crew members. They served the passengers well by demonstrating an astonishing degree of bravery and sacrifice in the end, as they strived to save as many passengers as possible.

In the musical, the crew gleefully sang, ‘I Must Get On That Ship’ as they boarded the ‘Largest Moving Object in the World’ and sealed their tragic fate.

One of the true-life passengers was the stoker, Frederick Barrett (Zach Brennan), whose job was to shovel coal into the furnaces to fuel the ship. Before he departed on the Titanic, he bid farewell to his love, Darlene (Gabbie Parker). A few days later on the ship, he proposed to her via Morse code from the radio room on the ship. Little did he know, he would never make it back to England to marry her.

When NA first announced that Titanic would be this year’s show, many of the cast members were not ecstatic about the selection.

“At first, we were thrown off. We’d never heard of the show, so it was foreign to us. We didn’t like it because it was unfamiliar and not upbeat, like most shows at this school. But as we started getting into it, we realized how important it was to convey the message that this was a real event that hurt so many people,” said senior Chloe Blashford. She described how much of a bonding experience it was for the entire cast to portray all of the suffering and tragedy that the characters had to endure.

Blashford portrayed one of the three Kates from Third Class who became close friends on the ship. The three Kates were Kate McGowan (Blashford), Kate Mullins (Grace Elliott), and Kate Murphey (Ava DiMartino), shown above.

A majority of the show took place on balconies. Part of the behind-the-scenes magic of the sets were the hydraulic motors hidden in each balcony. In the first act, the sets sat parallel to the ground, but as the ship started to sink during the second act, the hydraulics tilted the balconies to create the illusion of the ship submerging into the ocean. In addition to the balconies, the radio room was set on a severe tilt as Harold Bride tried tirelessly to locate another ship nearby.

A tea cart was wheeled into the First-Class Grand Saloon during all the commotion as passengers were awakened and ordered to don their life jackets. During the confusion, the cart suddenly rolled across the stage (with the help of a stage crew member using a remote control) and banged into the wall, furthering the illusion of the “sinking” ship. This creative engineering was designed and implemented by Tech Ed teacher, Kevin Zebley, and his students.

Junior Connor Day, the musical’s head of tech, said, “We had a ship that tilted on its own. It was set up on pneumatic pistons that were controlled by a control panel offstage by a crew member.”

Standing on one of the tiltable balconies was Charles Clarke (Joey Karlovits) and Caroline Neville (Lily Johnson), Second-Class passengers who intended to wed when they got to America.

One of the things she enjoyed most was sneaking into the First-Class Promenade to dance with the wealthiest of the passengers. She dreamt of being one of them herself, even though her husband was merely a hardware store owner.

“There were a lot of different [dance] numbers this year; we have ‘Barrett’s Song,’ which is very contemporary, and then we have a historical and a jazzy number, like ‘The Latest Rag.’ This year has more historical elements. There was a lot of partner dancing, like in ‘The Jig.’ The blocking makes the show a lot more fun. There are a lot more opportunities for acting and having fun. You can tell that we really like being on stage with each other and performing. We had a lot of fun with it,” said senior dance captain, Margaret Fenton.

One of the most climactic moments in the musical was when the Titanic hit the iceberg. Mr. Tozier and Connor Day spent an hour in his music theory room to make the sound effects for the scene using GarageBand.

“We used instrument sounds, crinkled paper, a squeaky chair, a rumbly sound, and so much more to create the sound. Every time I thought I was done, I went back and added more to it. I knew how long it needed to be, and I knew in my head what I thought it would look like if a massive ship hit an unstoppable iceberg,” said Mr. Tozier, the artistic director.

In the past few years, NA has stuck to more upbeat and fun musicals, but this year they decided to do something different. Because the show was more of an orchestral musical, the pit orchestra had the opportunity to play more emotional songs, rather than technical ones.

The orchestra played for about 85% of the musical’s duration, pausing only to emphasize a few lines of dialogue in strategic places in the script.

The prologue opened with the sound of peaceful and rhythmic waves, a stark contrast to the shrills and pounding percussion when the Titanic struck the iceberg. The music was crucial to stirring emotion in the crowd at various times–it was beautiful one moment and disturbing the next.

“I feel like there was a greater freedom to be more musical in this show than in years past. All the other musicals were jazzy and technical, but in this one, we had the opportunity to shape rhythms and dynamics to make it more emotional for the audience. It was an absolutely beautiful musical,” said senior French horn player Ana Granite.

Many of the audience members believed that this was one of the best musical performances NA has seen in years. Sarah Lehew, a senior citizen from the community, said, “This was by far the best show I’ve seen at this school. The talent on that stage was outstanding. There wasn’t a dry eye in that auditorium.”

Tears were flowing and sniffles could be heard throughout the audience as the full cast of victims and survivors of the Titanic spread across the stage for a rousing chorus of ‘Godspeed, Titanic.’ The cast took their bows, and the audience took to their feet in a standing ovation during every one of the seven performances.