Campaign signs can be seen all over North Allegheny. But how effective are they in the outcome of the election? 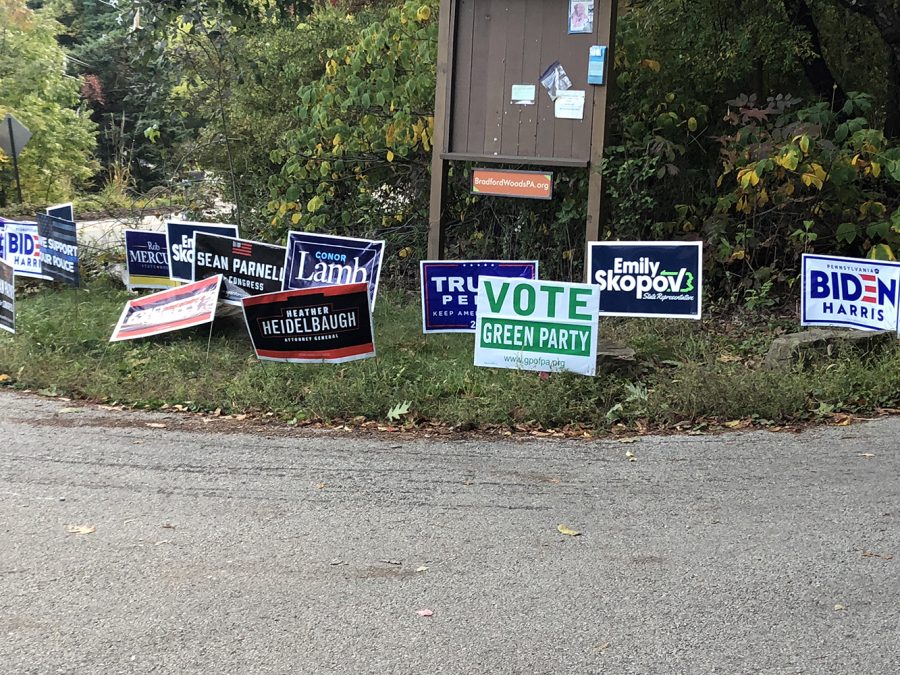 Political signs have been taking over the streets of North Allegheny in preparation for next month's election.

With the November election fast approaching, political yard signs can be found on virtually every street and corner. While such signs are a routine occurrence every election year, it’s uncertain whether they really mean all that much for the outcome of the election.

Elizabeth Simas, a political science professor at the University of Houston, has studied the data on yard sign effective and concluded that the results are mixed.

Yet it’s clear, even here at North Allegheny, that many residents feel the need to make a public announcement of their political preferences.  Sometimes only a yard away from each other, neighbors appear to be challenging each other with signs for their preferred candidates.

In Bradford Woods, a homeowner put up multiple Joe Biden signs in their yard and on their porch, one of which reads, “Veterans and heroes are not suckers and losers,” referring to an alleged comment made by President Trump.

Soon after the signs appeared, the house across the street took action. The home was soon decorated in Trump flags and signs, as well as signs for other Republican candidates running for both national and state-level congressional seats.

Political signs are not only found in yards but also in empty lots along main roads. Some residents appear to be going out of their way to put their own signs in front of those placed by others, and in some cases there have been reports of sign theft and destruction.

As contentious as the yard sign scene has become, it’s not clear that they will have any effect on the election outcome.

“I don’t think yard signs do anything,” NASH junior Alex Maslo said. “Most people already know who they’re voting for, and a sign isn’t going to change their opinion.”

However, NASH history teacher Mr. Ruppert thinks that signs do have some upside.

“I don’t think they convince people to vote a certain way,” Ruppert said, “but I think it’s a good way for people to express their opinions and show support for their candidates.”

The debate about political signs seems to come down to one question: should voters express their opinions publicly, or should they keep their beliefs to themselves?

The answer may depend on what type of election is occurring. Signs for presidential candidates may have less of an effect on voters because most of the population already knows about the candidates. Residents who have already decided who they are voting for won’t likely be swayed in the other direction by these signs, and undecided voters most likely won’t be deciding on a candidate just because they know who their neighbor will vote for.

However, signs for local and state candidates may be more effective. A large number of voters don’t know much, if anything, about candidates for state or local positions. In fact, most voters likely don’t even know their names until they see them on signs. Yard signs therefore can be important for lesser known candidates.

Needless to say, the decision to post a yard sign on one’s own property is clearly an exercise of free speech.  But while they may serve some benefit, it’s probably the case that the rest of the neighborhood wishes they were taken down.

“All they do is cause problems,” Maslo added. “That’s why a lot of people don’t express their political views publicly.”