Look Out the Window 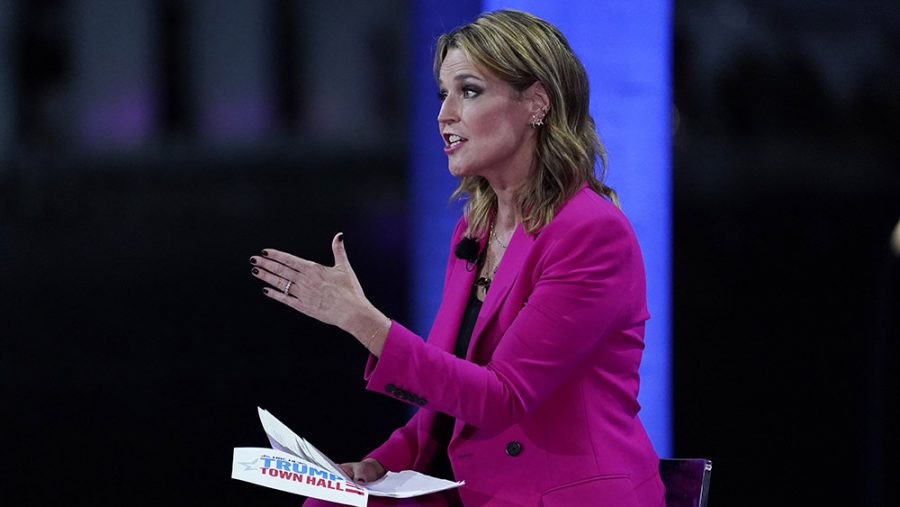 photo by Evan Vucci for the Associated Press

Savannah Guthrie challenged all of President Trump's rambles and lies at his town hall.

Anyone who watched the presidential candidates’ town halls on Thursday evening saw two very different programs– one on ABC, where George Stephanopoulos engaged in a somewhat uneventful, mostly polite discussion with former Vice-President Joe Biden, and one on NBC, where Savannah Guthrie went head to head with President Donald Trump.

Thursday was meant to be the second presidential debate, but after the Commission of Presidential Debates announced that the event would be held in a virtual format due to COVID-19 concerns, Trump refused to attend. So, Biden planned a town hall in its place. Trump later scheduled the same event at the same time on a different network.

However, for Trump at least, the town hall felt awfully similar to what was originally planned.

Trump still managed to avoid questions and provide confusing, vague responses, but every time he did, Guthrie called him out. She asked several follow-up questions and didn’t let the president get away with what he normally does during interviews and rallies.

Many Republicans criticized Guthrie for her tough questions and opposition to the president– the comments on the YouTube recording of the town hall almost all call Guthrie horrible and, often, sexist names, and memes of her designed to be some kind of monster made their way around Twitter.

Trump even said at a rally on Friday that he thought Guthrie was “out of line” during the town hall.

Most of her critics accused Guthrie of biased journalism, as they believe she let her personal views of the president impact her questions and attitude. However, in many ways, Guthrie did her job. She just did it while not allowing Trump to lie to the American people without consequence.

Unbiased journalism is important, but unbiased shouldn’t always mean neutral. It should be situational. If Donald Trump is blatantly lying and dodging questions, Guthrie needs to hold him accountable. Stephanopoulos should treat Biden the same way if he is behaving in a similar manner.

In fact, he did. Compared to his opponent’s performance, Biden’s town hall was much more grounded. However, whenever Biden did get off track or avoided answering a question, Stephanopoulos would say, “Let me push you on that.” And Biden would reply, “Sure,” before trying to clarify his point.

When Guthrie challenged Trump, on the other hand, he would yell at her and accuse her of being out to get him. After she asked Trump about white supremacy, he repeatedly muttered, “You always do this.” When Guthrie said she wasn’t asking Biden about Antifa because Trump was the one sitting in front of her, he said her response was “so cute.” When she pressed him about his varying stances on passing a coronavirus relief package, he asked her, “Did you ever hear of a word called negotiation?”

Stephanopoulos and Guthrie were journalists trying to get clear answers. Stephanopoulos simply had to push Biden less to get to the truth. Just because Guthrie had to be assertive in order to question the obnoxious president doesn’t mean she’s biased.

The people reading and watching and digesting journalism are citizens. In a perfect world, a journalist acts as a messenger between politicians and the American people. But if the politicians are lying, it’s unethical to present what they say as fact. Spreading misinformation is exactly what the mainstream media has been most heavily criticized for.

So, just as we want our journalists to report, we should also want them to intervene and investigate. We should want them to sort through what our leaders are saying and present us with the truthful, valuable aspects.

Guthrie was intervening on behalf of all of the people watching the town hall. She didn’t let the president claim that he had a solid stance on masks or that he had a great plan for healthcare or that he wasn’t being hypocritical by nominating Amy Coney Barrett so close to the election.

The second we start having a problem with a journalist pressuring the president of the United States for the truth is the second we stop supporting the First Amendment. It means that we would have stopped relying on the press as our fourth branch of government, as the watchdog. What would our democracy look like then?

There’s a quotation attributed to Jonathan Foster, a journalism professor at the University of Sheffield in the United Kingdom, that says, “If someone says it’s raining, and another person says it’s dry, it’s not your job to quote them both. Your job is to look out the window and find out which is true.”

Guthrie spent Thursday’s town hall looking out the window, and we should be wary of the day when journalists stop doing that.