The History of Thanksgiving

There's much more to the holiday's rich history than meets the eye - or the stomach. 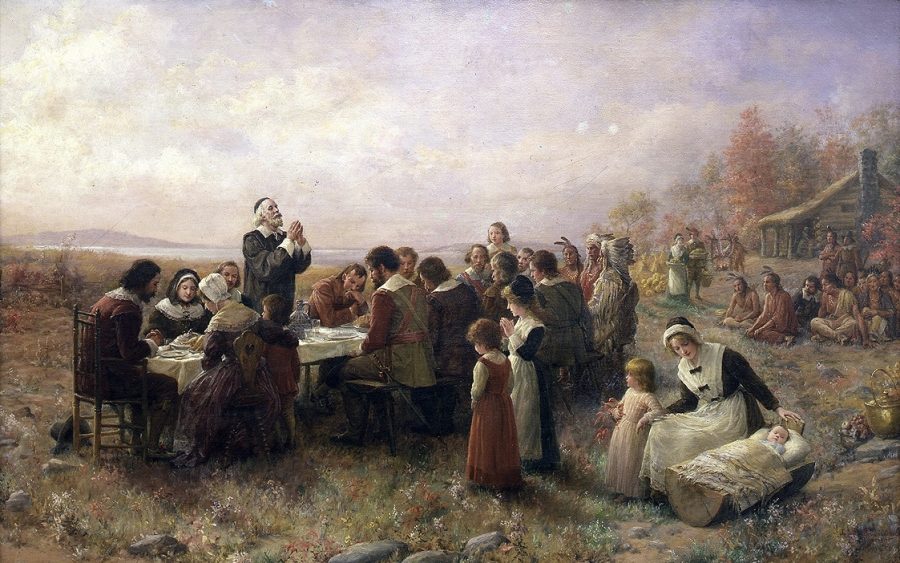 The First Thanksgiving at Plymouth

Let’s rewind 400 years before turkeys, pumpkin pies, and Pilgrim hats became staples of Thanksgiving.  At the beginning of the 17th century, the Thanksgiving was born, but it has quite evolved since.

66 days after leaving Plymouth, England, the passengers of the Mayflower, also known as the Pilgrims, landed at Cape Cod.  Despite popular belief, they were not the first Europeans to ever come to New England and interact with Native Americans.  Some of the Native Americans even already spoke English by the time of the Pilgrims’ arrival.

Because of its favorable conditions and location, the Pilgrims ended up settling at Plymouth in December of 1620.  Plymouth is a coastal town in Massachusetts that is south of Boston, but before it was settled by the Pilgrims, it was known as Patuxet, a Wampanoag village.  Patuxet, for the most part, was empty because of an epidemic that had killed most of its people.  In Plymouth, the Pilgrims began to build a village and home for themselves.

The Pilgrims had a difficult first winter, and most of them stayed on board the Mayflower during it.  Onboard, they faced outbreaks of contagious disease, exposure, and scurvy.  Many of them did not make it to the spring of 1621.  In the spring, the Pilgrims received a visit from an Abenaki Native American named Samoset, who could speak English.  He then later returned with Squanto.  Squanto was part of the Patuxet tribe, and he had been sold into slavery by an English sea captain before escaping to England then returning home.  This is why he had such mastery of the settler’s language.  Since the Pilgrims were so weak from the winter, he taught them things about food, crops, and plants, for example, which ones were the easiest ones to cultivate and grow.  Squanto was also the person who helped to forge the relationship between the Wampanoag and the Pilgrims.

After the Pilgrims first corn harvest proved successful, William Bradford, who was the governor of Plymouth, organized a celebratory feast that lasted three days.  Now, this is where some of the history gets complicated.  While most people will say Bradford invited the Wampanoag chief, Massasoit, there are some sources that dispute that.  They cite Edward Winslow, who came over on the Mayflower.  In his journal, Winslow says that the Native Americans were not invited, but when they heard the gunshots that the Pilgrims fired into the air, Massasoit showed up with about 90 warriors.

Either way, this celebration ended up with the Pilgrims and Native Americans coming together for a shared meal.  There is no exact list of the food on their table, but it is known that the Pilgrims went fowling, possibly to get turkey.  More likely, though, they killed ducks or geese since they were easier targets.  The Native Americans brought venison to the feast.  Additionally, there were most likely fish, fruits, nuts, and vegetables.

From these events, what we perceive as the first Thanksgiving was born.  The celebration helped to keep the peace between the Pilgrims and Native Americans, but unfortunately, it only lasted until King Philip’s War in 1675.

It was not until over 200 years later that Abraham Lincoln proclaimed Thanksgiving to be a national holiday on October 3, 1863 during the American Civil War.  Sarah Josepha Hale, a magazine editor who was 74 years old at the time, wrote to Lincoln trying to convince him to make it a national holiday, so everybody would celebrate Thanksgiving officially on the same day.

In 1939, Thanksgiving was briefly moved up a week by Franklin Roosevelt.  He did this in an attempt to extend the shopping period before Christmas, hoping to create more economic activity during the Great Depression.  While some states followed the president, others refused to, which resulted in two different dates for Thanksgiving.  In 1941, Roosevelt reversed his decision, and Thanksgiving was restored to its original date in 1863.

Now, fast forward to 2020, and Thanksgiving has significantly changed.  While the premise is still giving thanks, it is very different from before.  Every fourth Thursday of November, families gather to enjoy turkey, stuffing, mashed potatoes, gravy, cornbread, cranberry sauce, pumpkin pie, and more.

Thanksgiving also has a more commercialized side to it.  Many anticipate Black Friday, always the day after Thanksgiving, when stores offer deals for the upcoming Christmas season.  Some stores even open late on Thanksgiving night.  Also, football has become a hallmark of Thanksgiving.  From family games to the NFL, some would consider Thanksgiving incomplete without it.

Despite disputed facts and different foods, Thanksgiving has inevitably become a beloved tradition in America and even other places.  Its 400-year history is slightly tumultuous, but nevertheless, the holiday has endured through the times.