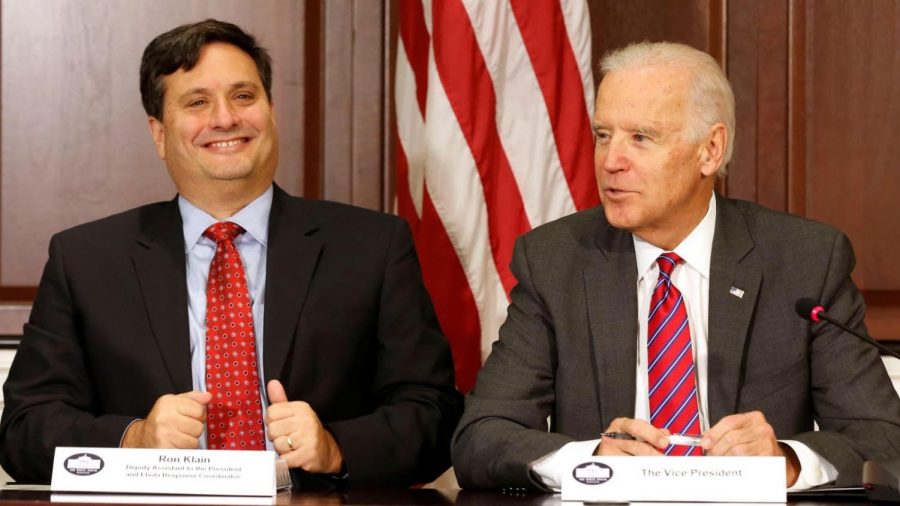 President-elect Joe Biden has begun to name his cabinet, which includes Ron Klain as Chief of Staff.

In the midst of all the excitement and controversy that has taken place just after the recent election, President-elect Joe Biden has found time to announce some of his choices for his presidential Cabinet.

The first to be announced was former Deputy National Security Advisor of the United States Antony Blinken, chosen as Secretary of State. Blinken served in the US senate for a total of six years. To see how Blinken may handle this role, we can look at some of his past roles in government. One of the most telling things about this pick is that, in 2003, Blinken, along with then senator Biden, supported the invasion of Iraq, contributing to the death of over 65,000 civilians, according to Iraqbodycount.org. This belief in interventionism continued into his time under Obama, as he advocated for more robust US involvement in the Syria conflict, and was in favor of armed intervention in Libya. Considering all of this, it is clear to see that Biden has chosen a war hawk, similar to himself, who has no intention of ending needless wars.

The next position that was announced was the US Treasury Secretary, filled by former Federal Reserve Chair, Janet Yellen. She largely focused on lowering the unemployment rate, which fell from 6.7% to 4.1% during her term, according to thebalance.com. In the past, she has also been in favor of financial regulations, such as raising federal interest rates. Overall, this pick doesn’t present any red flags, as Yellen’s economic policies could massively help the country recover from the economic turmoil caused by COVID-19.

Next up is the Secretary of Defense, filled by former CENTCOM commander General Lloyd Austin. This pick has sparked some controversy, as normally the Defense Secretary must not have served in the military within the last seven years before taking the position, and Austin last served in 2016. This means that lawmakers would have to vote to waive this law in order for Austin to assume the new position. The law is in place to maintain civilian leadership of the Pentagon, and it is hard to see too many lawmakers choosing to simply ignore it.

The Secretary of Agriculture was next, filled by Tom Vilsack, who served as the Secretary of Agriculture under President Obama from 2009 until 2017. Vilsack is also the current chief executive of the US Dairy Export Council, which is backed by the dairy industry. While this position is supposedly for supporting small, local farms, and farmers, as well as funding food programs across the country,  it is hard to see how Vilsack would be committed to this, given his ties to the corporate dairy industry. All in all, it seems that Vilsack is more focused on keeping the status quo and protecting big corporations than he is on helping working Americans.

The Secretary of Health and Human Services was filled by California State Attorney General Xavier Becerra. According to actionnetwork.org, police unions spent hundreds of thousands of dollars to elect Becerra as attorney general. When he was elected, he clearly favored police and felt that they shouldn’t be held accountable, as he sided with police unions against a law that would require police misconduct records to be public. Becerra also threatened legal action against reporters who had legally obtained records of police misconduct. All of this raises concerns that Becerra will stand in the way of positive change when it comes to police reform.

U.S. Representative Marcia Fudge was named as the Secretary of Housing and Urban Development. According to theintercept.com, as many as half a million people in the United States are unsheltered on any given night, and there is little doubt the problem will worsen through the pandemic, as the number of evictions grows. Fudge will be tasked with leading the cause against that, but she has limited experience in the field of housing. Fudge also refused to support the Equality Act in 2018, which would have helped to protect LGBTQ people from discrimination in areas such as housing, although she later voted for the act in the May of 2019. However, despite her apparent chance of position, this is still very concerning. How can we trust her to treat individuals equally and help all get access to affordable housing, when she is clearly hesitant to accept LGBTQ individuals? Overall, due to her lack of sufficient experience and questionable past, this seems like simply another token pick with no real intention of positive change.

The position of White House Chief of Staff was given to former chief of staff to the vice president, Ron Klain. Klain and Biden have of course worked together for many years, and this was a key reason for the pick. In fact, Klain has been working for Biden since the late 1980s, when Biden was a senator from Delaware, and Klain had recently graduated from law school. It is interesting to note that he led Al Gore’s unsuccessful recount of votes back in 2000. In addition to this, there are also some questionable details about his past. After the Gore campaign he was a Washington lobbyist for a mortgage company and drugmaker that underwent congressional investigation, according to BBC. This is adding more corporate influence to the Biden administration- something that there is certainly no shortage of within his team. The corporate influence will ultimately be yet another obstacle from the change we desperately need in this country as millions lose their healthcare due to private interests, especially during this pandemic.

The position of Director of National Intelligence went to former Department of National Security Advisor Avril Haines. According to The New York Times, Haines had a massive role in the drone strikes in countries such as Pakistan, Somalia, and Yemen, which killed somewhere between 384 and 807 civilians, according to The Bureau’s reports. This is yet another bleak reminder of the pro-war sentiment within the Biden administration and much of the Democratic Party as a whole. Haines is also somewhat moderate politically, which will likely lead to her deciding not to change the country’s pattern of endless wars and civilian deaths.

President of the Center for American Progress Neera Tanden was nominated to be Director of The Office of Management and Budget. Tanden has many issues in her past that stand out as glaring red flags. First, according to RT.com, Tanden made her pro-war beliefs clear when she said in an email, “We have a deficit, they (Libya) have a lot of oil.” Clearly, she is willing to risk the lives of innocent civilians and American troops, as long as it will benefit oil companies and corporations in the US. According to commondreams.org, Tanden is also vehemently opposed to not only Medicare For All but also Social Security. Apparently, Tanden is not interested in fighting for change that will benefit people’s lives and is actively pursuing policies that will make things even worse than they already are. Despite the thinly veiled guise of diversity, Tanden is in no way a good choice for this position.

Linda Thomas-Greenfield was chosen as the United States Ambassador to the United Nations. Thomas-Greenfield formerly held the position of Secretary of State for African Affairs. She has been a vocal critic of Trump and his Muslim bans, which suggests she will help to repair relations with some of the countries included, such as Nigeria and Sudan. She appears to be a strong pick for Biden’s Cabinet, especially in relation the others. However, she does have somewhat limited experience when dealing with certain US allies, so it will be interesting to see how she handles the new position.

Cecilia Rouse was chosen as Chair of the Council of Economic Advisors. She previously served as the Dean of Princeton’s School of Public and International Affairs. Rouse has made it clear that getting through the current economic crisis will be her first priority when she takes office, explaining, “We are once again living through one of the worst job crises since the Great Depression. Millions of families have had their lives turned upside down. The safety net has frayed, leaving vulnerable Americans to slip through into hardship and hopelessness. And importantly, structural inequities that have always existed in our economy are being exacerbated like never before.”

Rouse continued, “This is a moment of urgency and opportunity unlike any we’ve faced in modern times. The urgency of ending a devastating crisis and the opportunity to build a better economy in its wake. An economy that works for everyone, brings fulfilling job opportunities and leaves no one to fall through the cracks.” At the very least, it appears that Rouse understands some of the serious issues this country is facing, which is cause for optimism that she will strive to get the country through the crisis.

Finally, Former Secretary of State John Kerry was nominated for the role of US Special Presidential Envoy for Climate. Kerry claimed in an interview with NBC that the Paris Climate Agreement “has to be stronger” and said he is “confident we can get there.” It seems that Kerry understands that climate change is an enormous threat not only to the U.S. but to the entire world, and it seems he will take some of the required steps needed to face this crisis. However, it remains unclear what his specific plans entail.

While many of Bidens Cabinet picks appear to have been made for the sake of diversity, they are raising a looming question: Are they capable of bringing the positive change that this country desperately needs?