The Future of the Franchise

A bitter end to the season left many Steelers fans wondering what comes next for their beloved team. 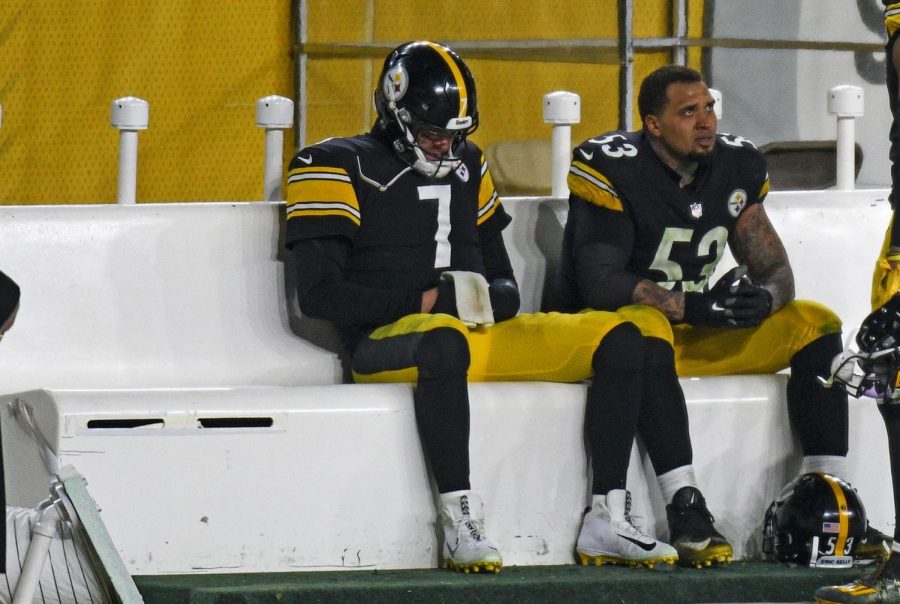 photo courtesy of Don Wright for the Associated Press

After the Steelers lost their first playoff game off the season, many players' futures were left uncertain.

The Pittsburgh Steelers have arguably one of the most stable and well respected organizations in the National Football League. However, after a very disappointing 2020 season, many Steeler fans are beginning to question the uncertain future of the franchise.

The Steelers’ 2020 campaign started off strong with an 11-0 record through the first twelve weeks. The defense looked as strong as ever in the early half of the season, led by superstar outside linebacker and Defensive Player Of The Year candidate TJ Watt. They finished top three in the league in most of the major statistical categories.

Franchise quarterback Ben Roethlisberger recovered well from his 2019 season-ending elbow injury, and his passing game was on fire with deadly weapons including JuJu Smith-Schuster, Dionte Johnson, and newcomers Chase Claypool and Eric Ebron. However, in a few short weeks, the 11-0 Steelers went from Super Bowl contenders to a team that many people said shouldn’t even be in the playoffs.

In week 13, the Steelers suffered their first loss to the Washington Football Team. While this was unexpected, Steelers fans stayed calm, as many assumed that it was only a matter of time until they would lose a game. Then, the  Steelers lost another game the next week to the Buffalo Bills, but the Bills were arguably the hottest team in the league at the time, so the loss didn’t come as a shock. However, fans really started to panic after week 15. In what was considered by many to be a “tune up game,” the Steelers took an embarrassing 27-17 loss to the 3-10-1 Bengals.

The Steelers had become the laughing stock of the NFL not only because of their lackluster play during games, but also for the players’ activities outside of football. Wide Receiver JuJu Smith-Schuster had once been known as one of the most beloved players in the league, but his tradition of dancing on opposing teams’ logos prior to games quickly made him one of the most hated.

Following the Steelers three game losing streak, comments referring to the song that Smith-Schuster danced to prior to games flooded social media as NFL fans rushed to mock his pregame antics. Smith-Schuster’s dancing had become so much of a distraction that head coach Mike Tomlin asked Smith-Schuster to stop dancing on social media before games.

Despite harsh criticism, the Steelers rallied to defeat the playoff-bound Indianapolis Colts and secured the AFC North Division Title. The Steelers were set to play their division rivals, the Cleveland Browns in the first round of the playoffs. This gave fans a glimmer of hope, as Pittsburgh had handled the Browns by a large margin early in the season and narrowly lost to them in week 17 without a number of their best players.

But this hope would be squandered in the first fifteen minutes of the playoff game. The Browns took advantage of a bad snap on the first play of the game as well as multiple interceptions by Ben Roethlisberger and jumped out to a 28-0 lead by the end of the first quarter. The Steelers battled back fiercely towards the end of the game, but Cleveland’s early lead proved to be insurmountable as the Browns claimed their first playoff victory in over 20 years.

In the last six games of the season, the Steelers’ running game was pretty much nonexistent, and opposing teams took advantage. This lack of rushing ability stemmed from an aging offensive line and lackluster running backs.

Pittsburgh can focus on this issue in the upcoming draft, but their free agency options are limited. The Steelers will enter free agency 25 million dollars over the salary cap, and with players like Mike Hilton, Tyson Alualu, Cam Sutton and Smith-Schuster needing to be re-signed, money will be scarce for the team.

The more concerning issue facing the team is their quarterback situation. While Ben Roethlisberger is under contract for one more year, the team still has yet to find a replacement for their future Hall of Fame quarterback of 17 years. But they have opportunities to land a player who could fill the role.

The Steelers recently signed former first round pick Dwayne Haskins, who was cut by Washington at the end of the season. Haskins has been criticized in the past for his lack of work ethic and was cut because his inability to focus on football affected his play when he filled in for injured starter Alex Smith.

While the Steelers organization is willing to give Haskins a shot, fans have been critical of the move. NASH junior Matt Miller is one said fan.

“Haskins won’t be able to turn his career around because of the things he does outside of football, but if he focuses on football, I think he has a chance,” he said.

Haskins is not the only possible quarterback of the future for the Steelers however. Jets quarterback Sam Darnold will enter the free agent market, and with the Jets looking to move onto someone new, Pittsburgh could be a great destination for Darnold, as he can learn and grow under Roethlisberger in his final year.

However, some fans still believe in Roethlisberger.

“I think we can win a Super Bowl with [Ben.] He played well early on and only dropped off when we stopped running the ball to help him out,” junior Alex Maslo said.

With so many different opinions on the quarterback situation, the Steelers will have their hands full this offseason with whatever path they chose.

Steeler fans are very stressed about the coming offseason, but they should have faith that one of the best organizations in football will make the decisions for their team. The Rooney family has proven for years that they can run their franchise at a high level, and Steeler Nation should take some solace in that.