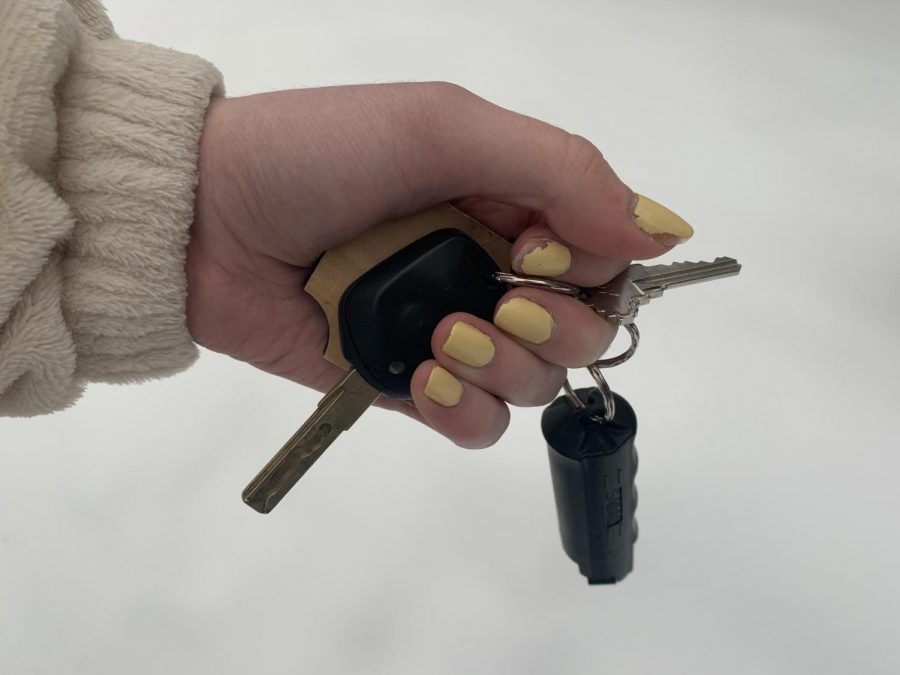 Every year, 4.8 million people are sold into sex trafficking. The majority of these victims are women.

This shouldn’t be happening anywhere in the world, but especially not right under our noses. Right here in the United States, people are taken off the streets, away from their families, and forced to live years of torture.

Although most students know what sex trafficking is, they might not know how much this fear affects girls’ daily lives. Some boys can be unintentionally ignorant about this fact because it is not something they go through every day. It is important to bring to light this reality that females live in.

Junior Evelyn Wiethorn, on the other hand, lives on an everyday sexual assault prevention routine.

“Anytime I go out in public, I always make sure to check under my car as well as in the back seat before going in and sitting down,” Wiethorn explained. “When I am in a parking lot, I try to park away from other cars if possible or next to cars that are small. I carry pepper spray wherever I go and when I am walking on my own, I hold my keys in between my knuckles for protection.”

Pepper spray is starting to be a necessity for young girls who may find themselves in dangerous situations.

“I always check underneath my car before I get in to make sure no one is under there to slash my ankles,” junior Ana Donaldson said.

It feels as though traffickers might be everywhere, and this fear expands to parking lots, workplaces, and even locations such as malls or movie theaters. When in big spaces, like parking lots at night, many girls make sure to keep an open eye.

“I can’t walk around at night anymore because I’m too scared,” junior Emily Yanchak said. “When I clock out for work and walk to my car, I have to constantly check my surroundings. I park under street lights and avoid secluded areas.”

A lot of sexual assaults happen by someone you know, so not everyone feels safe at work or at other group events.

“Whenever I am walking to my car, I hold my keys in my fist with the key part sticking out between my fingers,” explained Paige Vitanza a junior, “in case I have to defend myself along the way.”

Some girls fear just getting out of their car for a few minutes at night, such as when they need to get gas.

Junior Alli Schwartz simply stated, “I never go out for gas at night.”

Other students have expressed feeling bad vibes from people or being overly cautious about men in general just in case they turn out to be the bad ones.

“Whenever I am alone and there is a male behind or near me, I can feel myself become more aware of my surroundings,” said junior Emily Gierczynski. “When I leave work, I check under and in my car for people.”

A lot of girls hold their keys in between their knuckles so they have something ready to use in case of an attack.

“I always carry my keys between my fingers and lock the car when I get in,” said junior Megan Quinlan. “I’ve also talked to my mom about what to do if someone attacks you.”

Quinlan also makes sure to ignore if there is anything attached to her car. Predators sometimes tie things onto car handles and surprise their victims while they are untying them.

“I am planning on buying pepper spray for college,” she said.

“I look under my mom’s car before getting in at night,” explained junior Carolyn Mole. “I also always make sure not to walk with my hands in my pockets and never get in elevators when the only person in it is a male.”

Being sold into sex trafficking is many girls’ biggest fear, and they have thought their whole lives on what to do if this ever comes up. Likewise, junior Ana Hasselbusch doesn’t want to take any chances.

“I actually take many steps because kidnapping and sexual assault is one of my worst fears. I do simple things like carry pepper spray in my car and my purse. I have gotten into the habit of checking the backseat and trunk of my car before getting into it every night after work,” she said. “I have taken multiple self-defense classes and carry a pen in case of emergencies.”

Like my classmates, I too carry pepper spray in my purse and keep an eye open for anything suspicious.

Why should girls have to just deal with this? We shouldn’t have to have a routine planned out every day to keep us safe because some people don’t know how to treat other human beings. More needs to be done in our country with this.

Along with sex trafficking, there are so many other fears that live in girls’ heads, including rape, assault, street harassment.

Some men think that they have a right to touch a girl without her permission. This comes from ignorance, arrogance, and complete disrespect. This disrespect usually starts when they are children and teens.

Many girls who described their routines often talked about looking underneath their cars before they get in. This is because a new tactic for sex traffickers is cutting of the ankles while hiding underneath cars.

Another common theme among the routines was carrying car keys between their knuckles. It is heartbreaking that a girl should have to use regular items as potential weapons so that she can feel safe just walking the short distance to her car.

Here are some statistics about rape and sexual assault:

Nearly 1 in 10 women has been raped at some point in their life.

1 in 5 women and 1 in 16 men are sexually assaulted while in college.

More than 90% of sexual assault victims on college campuses do not report the assault.

Every 73 seconds, an American is sexually assaulted.

33% of women who are raped contemplate suicide.

I hope that one day women can walk to their car and feel like they are safe. This might be a far stretch but I believe that in the future we can do it. Those people that choose to keep their eyes closed please open them.