An Arbitrary Line in the Sand

The sciences and humanities are both invaluable to a well-rounded education. 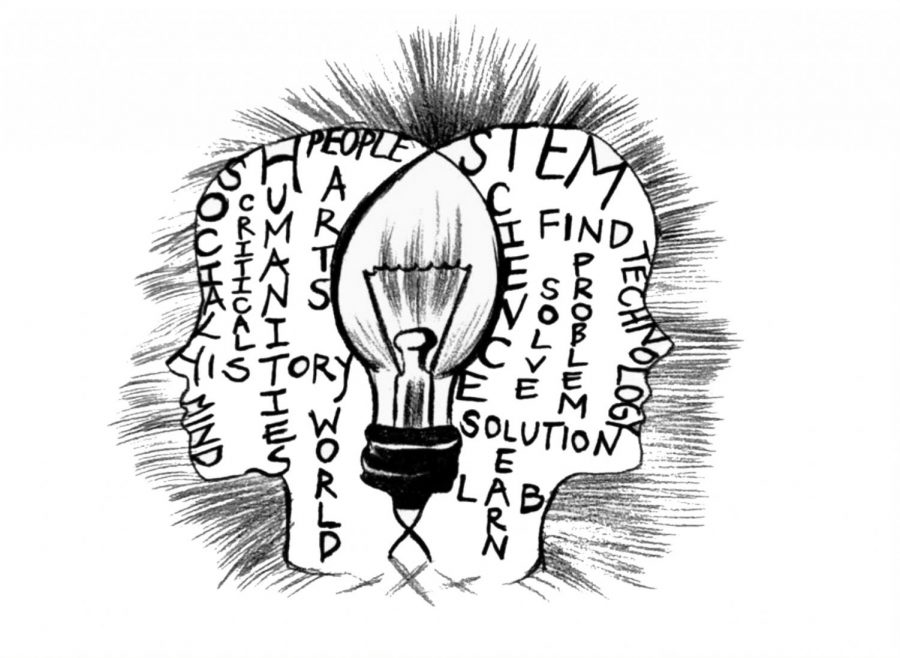 Telling students they should only excel in the humanities or sciences does more harm than good.

In elementary school, most North Allegheny students received a colorful little folder called a career portfolio. As early as first grade, we were told to write in it about activities we enjoyed, our favorite school subjects, and what we wanted to be when we grew up.

Those might seem like conflicting professions that have nothing to do with each other, but cut me some slack. I was in first grade. No one else’s answers made any sense.

What you can really judge me for is the fact that, eleven years later, I still want to be both of those things. I’m still interested in science, and, though I know it elicits a groan from most of the student body, I truly enjoy chemistry. And, if you couldn’t already tell from the sixty articles I’ve penned for The Uproar, I love to write.

Having a passion for both the sciences and humanities is not unique by any means, but our education system often treats it as a rarity. From as soon as their schooling begins, kids are labeled according to their aptitude in a particular subject. When students reach high school and are able to choose their own electives, they’re encouraged to pursue one path. English students are recommended to take only humanities electives. STEM (science, technology, engineering, and math) students have just about every science course they could think of laid at their feet.

So, while it’s not crazy to love both science and writing, I do think it’s uncommon to carry the torch for both subjects this far into high school, simply because of the way the education system is laid out.

And that’s a shame. No matter what subject students choose to adhere to, they miss out on a crucial aspect of their education.

The humanities sustain us. They make us better thinkers, communicators, and citizens. They encourage media literacy, and oftentimes, literature and stories allow us to lead more fulfilling lives.

So do the sciences. STEM values allow us to build meaning and structure in an otherwise confusing world. They give us the empirical answers we crave, and they let humans constantly evolve. Science quite literally saves lives.

Although both have fundamentally different principles, they’re equally important to our humanity and our future. That’s what makes studying them so rewarding. A student who is well-versed in both is almost guaranteed to be a better citizen and more well-rounded individual.

At the very least, that’s been the case for me. Over the past four years, I’ve split my elective credits between science and English courses, and I couldn’t be more thankful for the variety of experiences I’ve had. I know the chemistry classes I’ve taken will help me in the future, and I’m confident that all the writing I’ve done over the years has made me a better person.

We don’t want scientists who have no sense of compassion or personal discipline, and we don’t want writers who can’t understand the basic functions of the things that keep our lives moving forward.

Oftentimes, there’s a stigma associated with humanities classes. In a world so dominated by science, engineering, and medicine, literature and art can get left behind. Pursuing a career in the humanities can also be seen as a waste, considering that most individuals with a degree in English or art earn less than the average college graduate and have a higher unemployment rate than graduates who pursue engineering or health sciences.

But those statistics don’t make the humanities meaningless. It doesn’t mean they offer any less value to our lives. Try to get through a day without some kind of art, literature, story, or music. It’s nearly impossible. Humans need those things to get by.

Additionally, a 2016 study conducted in 18 countries found that students with degrees in the humanities typically performed better in areas that are linked to good leadership, and the arts bring in more money to the United States economy than the agriculture, transportation, or warehouse markets.

Even if you are, understandably, hesitant about going into a humanities-focused field, there’s no reason you can’t explore those courses in high school or college. I’m planning on studying science in college, but signing up for a journalism elective was one of the best decisions I’ve ever made.

That’s exactly why our education systems need to be careful when the humanities electives are on the chopping block. In 2018, the White House proposed a later-discarded plan to begin shutting down the National Endowment for the Arts and the National Endowment for the Humanities. Rice University recently suspended admissions to the Ph.D. programs in its school of humanities, citing budget deficits caused by the pandemic.

It seems that when institutions need more money, it’s easiest to take it from the arts and humanities departments.

But that causes students to miss out on all the advantages that those subjects offer, which is, again, a grave mistake.

It’s also a pitfall I hope North Allegheny doesn’t fall into. Undoubtedly, the pandemic has caused budget deficits for the district, and they’ll likely need to find a way to make up that money next school year.

While cutting humanities electives over science courses may seem like the clear choice, it’s much more complicated. We can’t deny students access to the subjects that allow them to thrive and make sense of the world around them simply because the careers in those fields don’t pay as much. We can’t forget about their value just because we are entranced by scientific advancements and a growing job market.

At the end of the day, a good education needs to be well-rounded and balanced. If you tell a kid they are only good at one thing, they’re likely to limit themselves to those expectations. If they’re an English kid, why should they even try to get a good grade on their math test? If they’re into STEM, what good does writing that essay do?

But if you give them the freedom to explore any academic endeavor, they’ll probably take advantage of it.

Of course, if a kid truly loves the humanities and despises anything having to do with science, or vice versa, that’s completely fine. But let them figure that out on their own. Don’t raise them to believe it can only be one or the other.

Because, even though school has recently felt nothing but exhausting and overwhelming, I still think there is a kind of magic to learning. It’s that spark of excitement and curiosity that the majority of us had when we were kids. And, most of the time, that genuine desire to explore the world and know more about it doesn’t adhere to the arbitrary categories we divide our school subjects into.