A Review of The Midnight Library 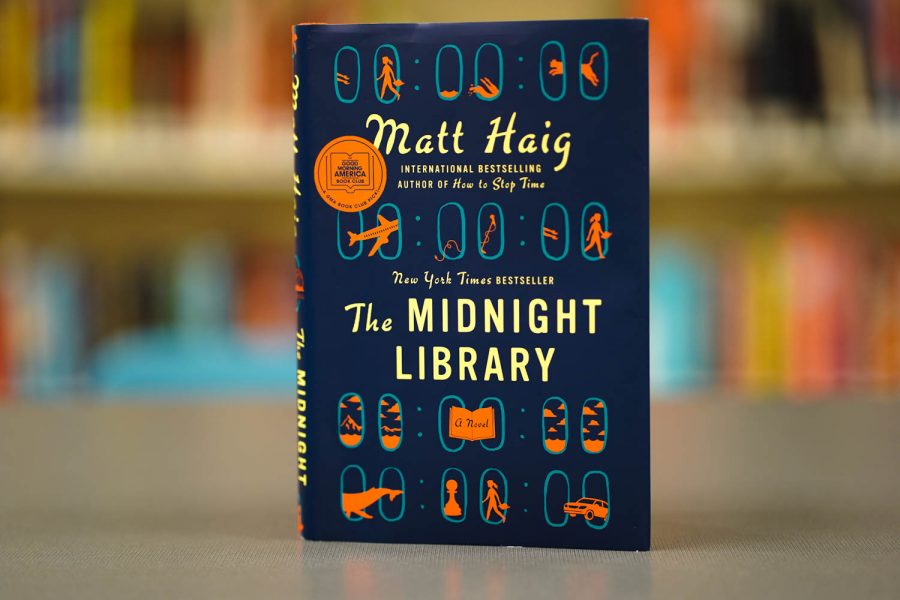 The novel forces protagonist Nora Seed to examine her life through a plethora of stories.

Trigger warning: This review contains content regarding depression and suicide.

Matt Haig’s The Midnight Library, a 2020 New York Times Bestseller and Goodreads Choice Award Winner in the fiction category, tells the story of a woman named Nora Seed. It opens with a quotation from Sylvia Plath that reflects a longing to live from a multitude of different perspectives and feel all of the emotions that life has to offer.

“I can never be all the people I want and live all the lives I want. I can never train myself in all the skills I want. And why do I want? I want to live and feel all the shades, tones and variations of mental and physical experience possible in my life,” it reads.

The story begins with a snippet from Nora’s past, where she is in her school’s library playing chess with the librarian, Mrs. Elm. They sit together and discuss Nora’s plans for her future, one in which she could decide to be a swimmer or a musician or even an Arctic glaciologist. We soon learn that this is the day that her father died.

Now, nineteen years later, she seems to be full of existential dread. Bad things just keep happening to her. A friend comes to her door to tell her that her cat is dead on the side of the road, she is fired from her job, her brother and best friend aren’t speaking to her, her only piano student quits, and finally, her old neighbor informs her that he no longer needed her to bring him his medication.

Following this chain of events, she begins to spiral out of control, inspired by the belief that she is no longer needed by anyone. She finally writes a note and “decides to die.”

As someone who has struggled and knows many people who have dealt with mental health issues, I found this blunt, honest depiction interesting and somewhat, though not entirely, respectable.

Nora has suffered from a mental illness for a while, but her cat dying is what ultimately sends her into a near-fatal spiral. This is something that may be relatable to those who have mental illnesses. While mainstream film and literature often depict being suicidal as becoming triggered by serious matters such as the death of a loved one or other forms of trauma, seemingly smaller issues can also be what pushes someone off the edge.

In the first chapter after Nora tries to kill herself, titled 00:00:00, she wakes up in what at first seems to be some sort of heaven. It soon becomes clear that a quote included before the book’s first chapter foreshadowed the event.

Mrs. Elm eventually appears and explains to Nora that each book in the library represents a life that she could have lived if she had made all sorts of different decisions. The library was not heaven, or any sort of afterlife at that, but instead, a place where she could see her life in alternate universes and undo her regrets.

This was when the book truly begins.

Although Nora insists that she wanted to die, throughout the book, she jumps from life to life, trying to find the “perfect” one for her. Mrs. Elm tells her that if she was meant for a life, she would be able to stay there and eventually forget everything about the library.

In one life, she is an Olympic swimmer, and in another, a famous rock star. She lives, momentarily, all the lives that she once thought she had dreamed of. But after each life, she fades right back to the library.

What is most compelling about this story is that it makes the reader think about their life, regrets, and overall perception of the world.

As humans, we tend to mix up our perception of ourselves and our goals with the pressures that others put upon us. Along with this, it is exceptionally easy to believe that life would just be “better” if we had made a few different decisions, even though this is not true in the long run.

Another aspect of the book that drew me in was author Matt Haig’s interpretation of the butterfly effect.

In some of Nora’s lives, even when she notices a plethora of good qualities in her new self and environment, something is always painfully different or wrong. Different people are dead or alive, close friends are strangers, and she is still depressed, as she could see from medications or self-inflicted wounds, even when her life seems perfect on its surface level.

This shows that our actions and decisions can have an immense effect on others, and objectively good things may come with detrimental consequences.

While I would argue that Nora herself is well-developed throughout the book, she is the only character that is even remotely multidimensional.

The characters come off as shallow and robotic, even though there seemed to be a lot of room for furthering who they were as people. I found myself disliking characters like her friend or her brother. This was not necessarily because they were bad people, but because their stories are hardly ever explained. By the end of the book, all I knew about these characters was that her brother is gay and that her friend is in Australia and occasionally sends her pictures of whales, depending on the life Nora is in.

What concerned me the most, though, was the author’s lack of depth and complexity surrounding severe mental illness and recovery. This was even more disappointing because the author has openly dealt with mental health issues himself.

Although a new perspective on life is sometimes helpful in the process of recovery, it is important to note that recovery is never entirely linear or caused by external factors. There will always be challenges, yet Haig, in a multitude of ways, made it seem as if Nora could just magically recover after her experience in the library. He also ignored the fact that depression is often not only situational.

When all is said and done, I would recommend this book to most people. It’s fast-paced, and the setting changes enough to keep you interested. It dives into a variety of relatable and thought-provoking subjects, even if they’re illustrated in an over-simplified manner.

I would most likely not recommend it to people who are currently struggling with the issues outlined in the text, just because it may cause them to feel as if their struggles are being reduced. On the other hand, maybe it could serve as a reminder that we are all full of potential and that our lives mean more to others than we think, for better or for worse.

The story is multi-layered, and it makes the reader think about a variety of philosophical and psychological concepts. Since finishing this book, I’ve even found myself imagining what I’m doing as other versions of myself, and it’s difficult not to reflect upon how different those lives could be.