A Decade of Iconic Cinema

The movies of the 1980s have survived through time due to content, characters, and themes that are still relevant today. 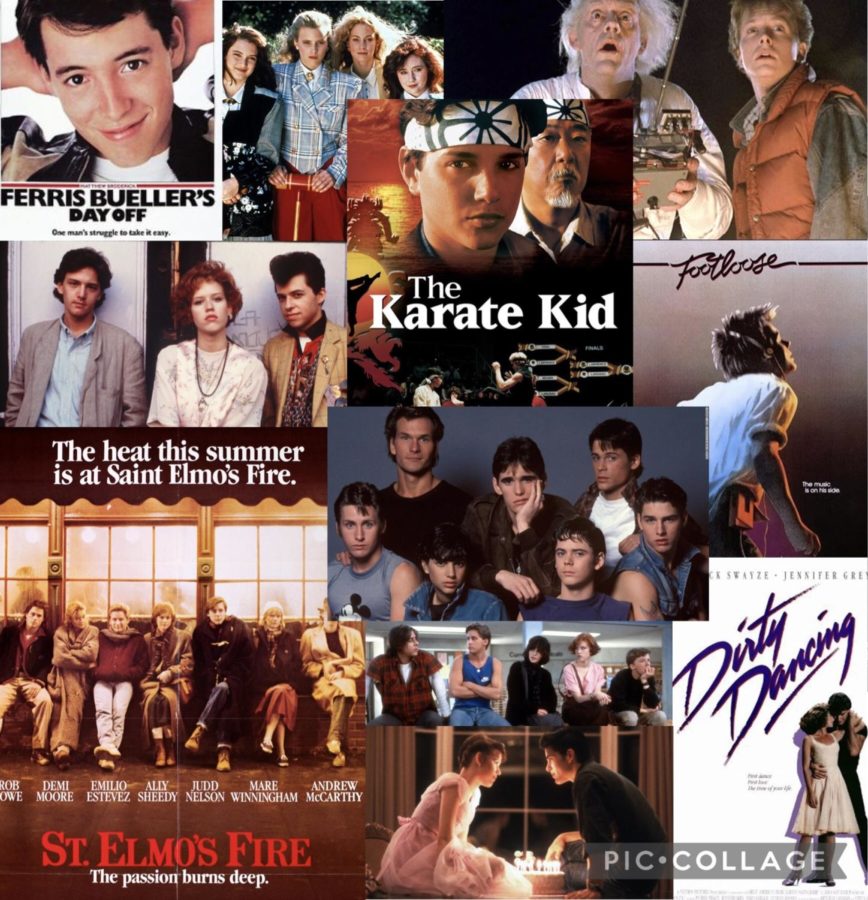 Iconic teen movies from the 80s contain themes that have kept them relevant even after 35 years.

The 1980s brought history big hair, influential music, timeless catchphrases, and incredible style. But there’s one aspect of the decade that has surpassed time, continuing to stay relevant: the movies.

Though the acting wasn’t always top tier, the cult classic 80s teen movies have become pop culture phenomenons. Their iconic nature has led generations since to become absolutely drawn to them. But that’s not the only reason these movies have survived time. Their relatable content and storylines have created a place for audiences to reflect on important messages that lie behind the comedy.

A brain, an athlete, a basketcase, a princess, and a criminal all fight their school’s societal norms in a Saturday detention while discovering that they are not so different after all. The Breakfast Club, released in 1985, combines sarcastic humor with deep underlying themes to make a truly iconic product. The film still to this day has such a cult following but less for its witty aspects and more for its relevance to common high school life.

High school can be a brutal environment filled with judgment. Maneuvering through it isn’t always the easiest task for teens, unfortunately, and it has been this way for decades. The Breakfast Club explores the boundaries of the stereotypical social groups that create the judgment of high school by forcing five individuals from all backgrounds to get to know each other in an enclosed school building.

Teenagers today watch this film and continue, just as teens in the 1980s, to witness the cliches within their school that are also in The Breakfast Club. It teaches, in a way, how to cross those boundaries and break the status quo of just staying in the same group. People are people and are not defined by what high school cliche they’re in.

This timeless belief is explored in The Breakfast Club, and it still shines light on the social problem to this day making it just as relevant and relatable as when it first came out.

The popular, nice boy and the lower class, innocent girl fall for each other all while the girl’s best friend watches enviously as he is just as in love with her. Pretty in Pink takes into account the lower and higher class divide among high school students and how that affects their social life along with the need for real, truthful friendships.

The big houses and the nice clothes are an envied trait that high school students focus on as well as the pretend value that a person with those luxuries possesses. Many get caught up in the divide between the wealthy and poor due to the social worth received from peers if they have lots of money. Pretty in Pink plays on this concept and how to overcome the feeling of being less in society. Today, the monetary divide affects so many young people in their schools still.

The movie also pays relevance to the importance of genuine friendships seen between the main character, Andie, and her best friend, Duckie. Friendships in high school go through many journeys—through thick and thin and up and down many hills. Working through differences and overcoming betrayal is portrayed in Pretty in Pink, allowing teens over 35 years later to still perceive the film as relatable.

When a “sick day” off from school turns into a thrilling adventure filled with parades, convertibles, and an exquisite art gallery, life changes from ordinary to something extraordinary. Ferris Bueller’s Day Off expresses the overarching theme of living life to the fullest because “life moves pretty fast,” just as Ferris said himself.

It’s so easy for high school students to get stuck in a tunnel vision thought process instead of just living life as it comes. Aside from its comedic aspects, Ferris Bueller’s Day Off conveys a very important message to young people—being serious about everything isn’t going to get you anywhere. Laughing and making memories is what makes life special.

The relevance this movie has to this day, especially with a pandemic causing so much stress, is undeniable. Teenagers have had to take life very seriously lately with such sudden changes, so stopping to take a look around at life hasn’t happened enough. The film continues to be relevant for the message of enjoying life even when it’s difficult to.

Music and dancing are outlawed in a small, conservative town after a terrible car accident occurs due to the playing of loud music. One boy takes initiative to prove that the kids of the town can make things right and are able to take matters into their own hands. Footloose has been adapted into a Broadway musical and even a remake was made in 2011, but that’s not the reason the film is still considered a classic today.

Footloose represents young people taking a stance against something they feel is unjust. The message is one that needs to be expressed in today’s day and age just as much as it was needed in 1984.

The film remains relevant for its inspiring theme of teen empowerment and stance on issues that they care deeply about for it is highly important for young people to speak out on what they feel isn’t right.

The 1980s produced iconic teen movies that still have an enormous impact on society today. Though, yes, they do have incredibly funny characters, and iconic lines still referenced, their underlying messages and themes are the real reason the films stay relevant even over 35 years later. The timeless nature of these themes has created a place for generation after generation to find comfort in the iconic content.