The Two of You

With over a dozen pairs of twins in the NA Class of 2021, the arrival of graduation presents an unusual transition. 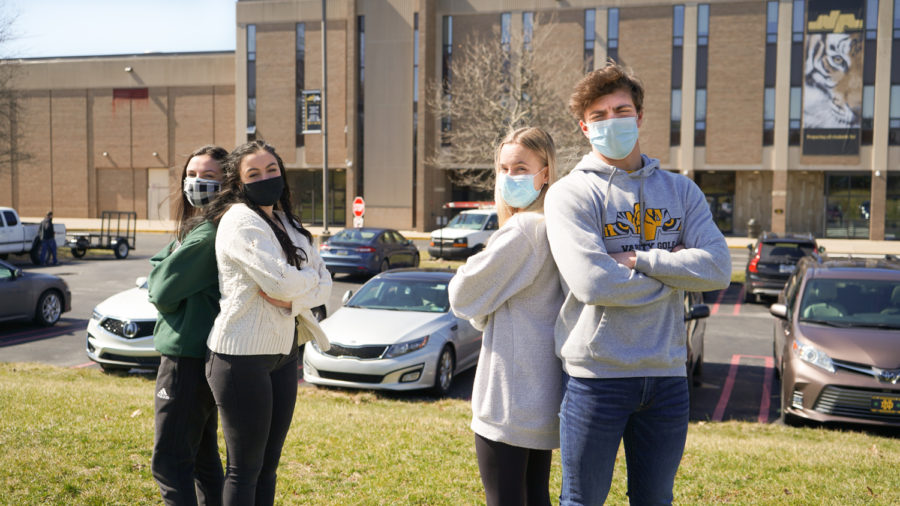 Sophia and Grace Elliott and Julia and JJ Dopkosky are among over twelve pairs of twins in the Class of '21.

Imagine having someone by your side since day one. The two of you have a bond closer than most, and many describe it as having a built-in best friend.  You’re twins.

The rate at which twins are born has been on the rise across the world, and North Allegheny is no exception. The NA Class of 2021 has over twelve pairs of twins. But with graduation on the horizon, the prospect of college may soon bring about significant changes in their lives.

Aveline Plenter and her sister, Oriana, plan on attending different schools in the fall.

“I definitely think the biggest change is going to be not being able to see her on a regular basis,” Aveline said. “I’m going to miss having a person around who understands me so well. It’s nice being able to talk to someone who knows all the people I mention or can relate to the stories I tell.”

Nevertheless, Aveline is excited to see what will happen when she and her sister pursue their own separate lives.

“I will say that some space is definitely going to be good,” she added.

For Oriana, the transition will bring another benefit.

“It will be nice to have a sense of social independence, as people like to lump Aveline and me together as ‘the twins,’ opposed to viewing us as two separate people,” she said.

Miarra Misutka is not sure whether she and her twin sister, Keeley, will attend the same college.

“She [Keeley] already committed to Bucknell for running, and I am still waiting on a few more options,” Miarra said. “I did get accepted to Bucknell, and it is in my top two choices at the moment.”

Yet Miarra is intent on not letting the fact that Keeley is going to Bucknell factor too much into her decision.

“I would like to go to the same school, so I can have a familiar face, but at the same time, I want to branch out and make new friends” she said.

Regardless, it’s hard for Miarra not to feel as if an enormous change is about to take place.

“I feel like the biggest change will be not having a built-in friend,” she said. “Throughout elementary, middle, and high school, I have always had someone who I could talk to.  My twin was always there when I needed help on homework or if I accidentally forgot a worksheet at school.”

Grace Elliott and her sister, Sophia, will be attending schools in different parts of the country. Sophia will enroll Slippery Rock University in northwestern PA, and Grace will attend Miami University in Florida.

“The biggest change will probably be just not seeing each other,” Grace said. “We drive together, I see her every day before I go to sleep and when I wake up, and we both have really never been away from each other before. I can tell her everything because she knows better than anyone else who I am and what I go through.”

Senior Portland Canovali and his brother, Peter, will both be attending Westminster College in northwestern PA in the fall.

“I have had a good connection with my brother since we were born, so being with him throughout all of our school time wasn’t anything too weird or too complicated,” he said.

Yet the Canovalis never planned to end up at the same college.  As it turned out, the two chose Westminster independently of each other.

“Honestly, I didn’t think it would happen,” Portland said.

Both Julia and JJ Dopkosky plan on attending Penn State next year. And for Julia, there is a sense of relief in knowing that she will have her brother nearby, even though the size of Penn State may mean that they don’t see each as often as they are accustomed to.

“It’s very reassuring that we’ll be at the same school,” she said. “However, the biggest change will be not having him by my side, physically, like I always do at home.”

JJ, too, is ready for the next chapter in their lives.

“Julia and I will always have each other,” he said.  “It’s going to be different for sure, but we will make the most of it.”