A Review of Thunder Force

One of Netflix's most recent originals proved to be predictable and disappointing. 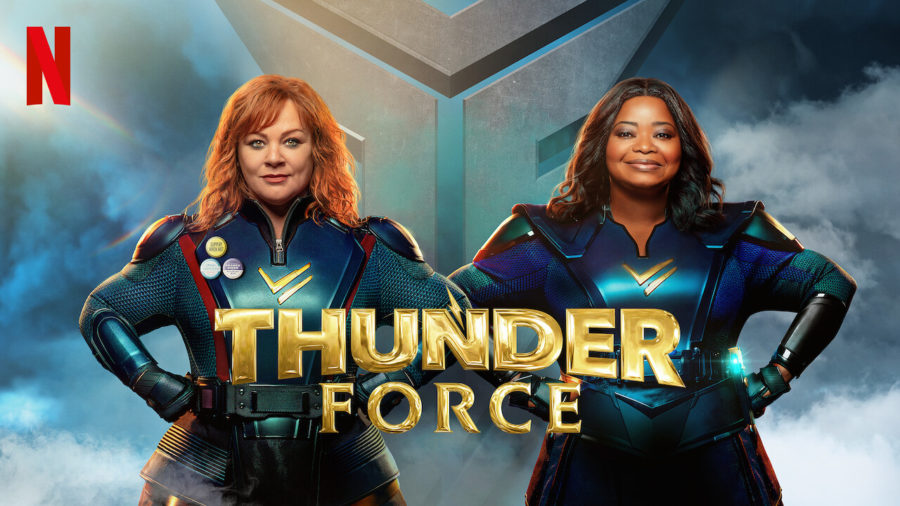 Melissa McCarthy and Octavia Spencer play the heroines in one of Netflix's latest releases.

When it comes to Netflix originals, I always find them to be either a hit or a miss. Recently, while I was scrolling through Netflix’s top ten list, I was intrigued when I saw Melissa McCarthy starring in the new Netflix original Thunder Force. But when the movie was finished, I was left with wondering why did I just watch this?

The film, directed by Ben Falcone, stars McCarthy, Octavia Spencer, and Jason Bateman. Netflix categorizes this as a superhero action movie, but I would say it’s more of a slapstick, late-night comedy. The movie has a horrible sense of humor and is filled with cringey moments.

It starts with a backstory, like every superhero movie. The world is terrorized by villains called miscreants. Young Emily Stanton’s parents are tragically murdered by miscreants, forcing her to move in with her grandmother. Emily, later portrayed by Spencer, promises she will finish the work her parents started and one day defeat the miscreants.

On her first day at her new school, Emily becomes best friends with a classmate, Lydia Berman, played by McCarthy. They end up getting into a huge fight when they’re older and going their separate ways.

Years later, the two reunite. Emily becomes a well known scientist that creates a mutation to turn regular people into superheroes. Unsurprisingly, Lydia accidentally inserts herself with one of the genes. The two former friends have to work together in order to defeat the miscreants.

The story is so predictable. Many superhero movies feature the protagonist avenging a loved one and the friendships made along the way.

I also found Lydia annoying. There were certain points in the movie where I couldn’t stand her.

The movie pokes fun at McCarthy and Spencer’s weight, which is just classless and not funny. There was a scene where the two struggle to fit in a car because of their size. The characters also apparently have no ways to clean their suits, which makes them smell bad and adds to the stereotype that some big people are unhygienic.

I personally think these actresses are both incredibly talented and should not have their body size mocked under any circumstances. I feel as if every movie McCarthy does always finds some way to make fun of her. It’s upsetting to see an actress being the butt of the jokes in every movie.

Don’t get me wrong, there were funny moments to the movie, but overall the humor was pretty dry and lacked originality. Several jokes tried, and failed, to appeal to a younger audience. For example, there is a point in the movie where Lydia does a Fortnight dance.

Thunder Force left many other disappointed, as well. Critic Noah Berlatsky called it “tedious and unfunny,” and viewers rated it a 23% on Rotten Tomatoes and two stars on IMDb. Overall, if you’re in the mood for an action film, I believe you’re better off watching a Marvel movie than Thunder Force.