For Palestine, an ongoing horror

The latest conflicts in Gaza point to a longstanding injustice. 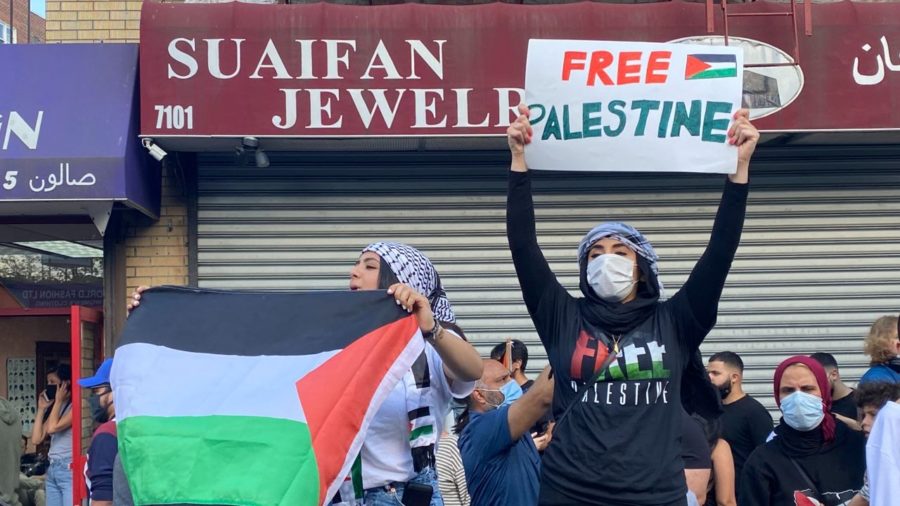 One of the many protests for Palestinian liberation that have taken place around the globe, this one being in Bay Ridge, Brooklyn.

“We know all too well that our freedom is incomplete without the freedom of the Palestinians.” This is what anti-apartheid activist and South African president Nelson Mandela said many years ago, and these words remain true to this day. He, of course was on the United States’ terrorist watch list until 2008, which is quite fitting, and helps us to better comprehend the America’s staunch opposition to and demonization of those standing up to colonialism and apartheid, including those in Palestine.

Tensions between Palestinians and Israeli settlers have been high since the occupation began in 1948. However, in recent weeks, conflicts have escalated, largely due to a series of “evictions,” as the media would label the forceful displacement of 13 innocent Palestinian families. Recent airstrikes that have killed at least 42 Palestinians, including 10 children.

While this situation seems to be reaching a boiling point, it is important to remember that Palestinians have faced oppression from the Israeli government for generations. In fact, today the number of Palestinian refugees and their descendants who have been displaced is over 7 million , and since 1967, Israel has demolished over 27,000 Palestinian homes in occupied territory. Additionally, since just 2005, at least 3,838 Palestinians have been murdered by the Israeli state, which is nearly 23 times more than the Israeli death toll in the same time period.

This kind of settler colonialism seems indefensible and completely out of place in the 21st century. However, the occupation, backed fully by the US and most of the other imperial powers of the west, is just as violent and prevalent as other examples of colonialism in the past, including the founding of modern-day America, as well as the brutal imperialism that plagues nearly every single country outside of this imperial core.

In fact, support for Israel from the country that claims to be a defender of human rights and an example for the rest of the world has only strengthened. In the 2019 fiscal year, the United States gave Israel $3.8 billion worth of aid, with the vast majority of this money going to the country’s military budget, directly funding the countless and horrifying war crimes committed by the state against Palestinians.

Even more recently, President Biden approved the United States’ sale of $735 million worth of weapons to the Israeli military, sending a clear message to Palestinians and colonized people across the globe that this country stands firmly in opposition to their liberation. When Vice-President Kamala Harris claimed to “stand with Israel because of our shared values which are so fundamental to the founding of both of our nations,” she could not have been more honest.

For the average American, an honest and critical look at the modern-day occupation of Palestine may seem intimidating and inconvenient because it may force them to evaluate the foundation and values of their own country. However, it is extremely important that we all do this honestly and with a certain degree of objectivity. The truth is both Israel and the United States were created through brutal and forceful colonization and ethnic cleansing, and both states’ horrendous acts of violence and genocide against respective indigenous populations must not be forgotten.

Another point of discussion is how the western media tends to discuss acts of rebellion against colonization and the whitewashing of the true horrors of what is unfolding in Palestine. Many platforms have reduced forceful displacement and demolition of homes to “evictions,” painting the illusion that it is the Israeli government’s legal right to steal the homes of innocent Palestinians. The word “conflict” has been used to discuss the ethnic cleansing of Palestine, seemingly suggesting that a nuclear power backed by billions of dollars aid from western powers is somehow on a level playing field with an indigenous population that has been oppressed by that very state for generations.

While phrases like those may seem minor, they are very important to how readers view the situation and how they form a clear image of what events are going on. When mundane words are used when describing genocide, it creates a sense of apathy among the general public and allows many to ignore the harsh reality of the situation.

Some may counter Palestinian liberation arguments with the belief that Israeli state has the right to self-defense. However, the truth is that the entire foundation of Israel is based on illegal settlements. With the very existence of the state not being legitimized by any legal or moral standards, how can one claim that they have the right to defend themselves against the very people that they oppress? It is clear to see that the Israeli government is the aggressor towards Palestinians, and any retaliation from these people is a direct result of their oppression, rather than the cause of it.