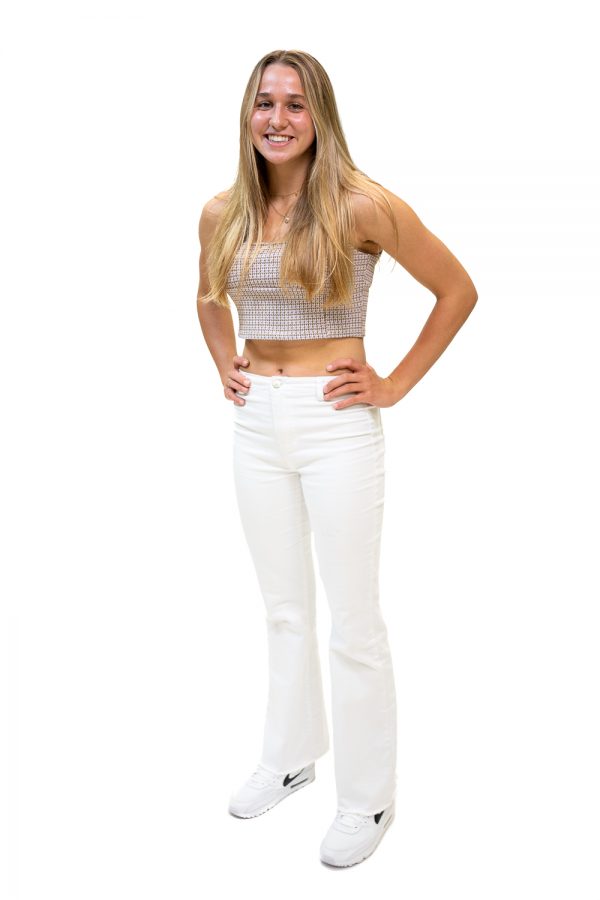 How did you get started playing volleyball?

Everyone in my family played. My mom played in college and then continued her career on the National Team. When my brother started to play, my sisters wanted to too, and then I just followed.

Recruiting coaches first started to reach out to me in eighth grade, before the NCAA rule changed, and then when it became forbidden, there was a quiet period for two years.  On this past June 15th, the coaches were allowed to start calling me again and that is when I got my offer from Ohio State.

As an athlete who plays both basketball and volleyball, why is volleyball the sport you want to continue?

I just loved it more. I found that I wanted to put more of my time into it because I enjoyed it more than basketball.

How did you know that Ohio State University was the place for you?

To be completely honest, I hated Ohio State. Everyone knew it too because when they wore Buckeye gear I would hate on them. I was a huge Michigan University fan because everyone in my family went there. Then I started to consider them when I heard that they got a new coaching staff and they had a really good season. After I took a visit there, I absolutely fell in love with it.

Do you have any pre-game rituals?

Uh, yes! I have a few. On my way to games, I have a playlist that I listen to when I need to get hyped up. This is kind of embarrassing–well, not really but kind of–  on big game days I will listen to David Goggins who is an inspirational speaker. He gets me really fired up. Nothing really big, but it is the little things that get me ready to play my best.

You have a family legacy of sports. How has that shaped the athlete that you are?

When I first started playing, it was the fuel that inspired me because I wanted to be as good as my parents. Once I started putting more effort into practice, the movements started coming naturally. Competition has been something that I have always grown up with so I have never really been afraid of it, rather I take it in stride.

With the lady tigers winning 4 state championships in a row, how does that affect the pressure that is put on to the team?

You would feel that it is a lot of pressure, and at times we do definitely feel it, but we are very good at focusing on one day at a time. Of course, we are always thinking of that goal, a state championship is always in mind, but we are constantly thinking about bettering the little things. We play game by game and really focus on putting in the work while in the moment instead of getting caught up with a final result.

What would you say to a player who showed up in biker shorts?

This sounds so bad, but if you show up in long spandex everyone in the gym kind of knows that you are probably not the best. We don’t like to judge, but at the same time, we do assume you are newer to the game. It’s just kind of an unspoken thing that all of us players know. Also, don’t wear turtle shell knee pads or low socks. Sometimes girls will try to wear low socks and, you just can’t do that.

Since you are a setter, do you have any advice for people who are struggling with their vertical?

If you want to jump higher, definitely do some box jumps and practice agility. In order to make your legs stronger, incorporate explosive movements. Maybe some sprints could help with that too.

Who on the team would most likely get injured for doing something stupid?

Leigh Failla will roll a lot. When she dives for a ball she will do a roll so that she gets up faster. Most people don’t roll, but she used to be a gymnast so she can do it easily. Sometimes though I really think she is going to hit her head on the ground. I mean I am not saying she would, but she likes to do little handstands and cartwheels. Plus she is always injured so, I would vote her. Also, Maddie Fickes. She is like a zoo animal. You can never expect what she will do next. Abbey Hahn and I said we could just watch her for hours and we would never get bored. She is very entertaining.

What song would describe the NA Girl’s Volleyball Team?

We used to listen to “I Want to Dance with Somebody” almost every bus ride home, but it is slowly dying because no one really likes it anymore. We have a few locker room songs that we listen to every game, but nothing really describes us as a whole. Preferably it’s something with a fast beat that is easy to dance to. Maybe something Cardi B?

If everyone on the team had to get the same haircut and style, what would the look be?

I love my hair so if it wasn’t including me I would want it to be something funny. I’m thinking pastel bobs with bangs.

What teammate would you love to switch families with?

We have some really good families, so this is a tough one. Some of these girls have some cute brothers though, so it would have to be where I switch families not biologically, but just live with them. Not even necessarily the brothers, but the brothers’ friends. So when they hang out I will be there. Like for example, I could see myself living with the Treser’s.

If you were a video game character, what would be your default outfit?

I really like bigger t-shirts and athletic shorts. Plus, it is practical so if I would have to wear it every day I would be fine. My Nike Air Max 90s would also make an appearance.