It’s a Small (and Spooky) World

For English teacher Mr. Rhinehart, miniature building is an artistic outlet, and his graveyard display in the NASH library showcases an attention to detail that can only be achieved through decades of practice. 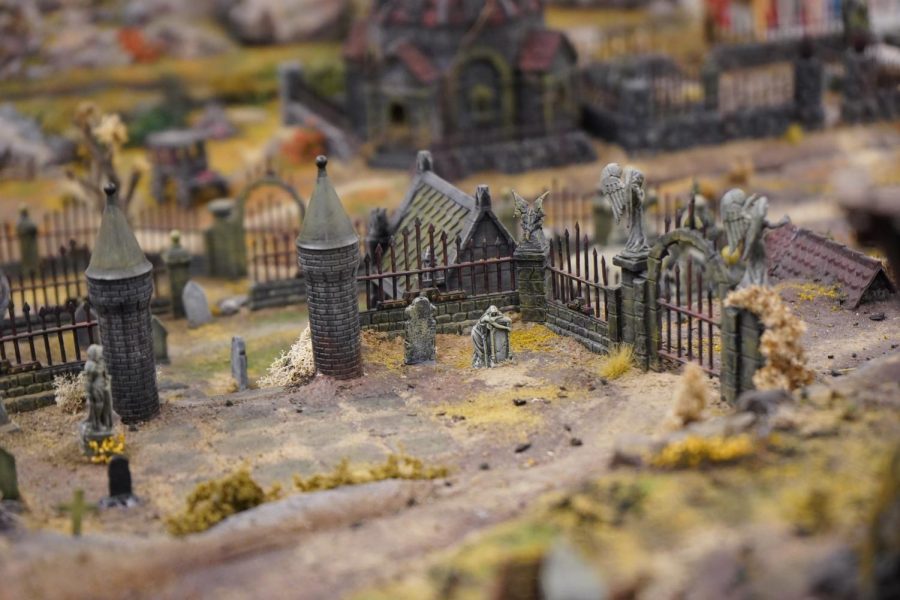 AP English Language teacher Lance Rhinehart does not only specialize in the art of teaching Moby Dick and rhetorical analysis.  For the past year and a half, he has spent much of his free time building a meticulously detailed 4×6-foot miniature graveyard structure, now on display in the library.

“[Building miniatures is] fun for me because it encompasses everything I like, such as history, stories, fantasy, and using my imagination,” Rhinehart said. “It fulfills my need for a creative outlet.”

The hobby, which Rhinehart has been pursuing for nearly 20 years, stemmed from his love of art and his desire to further his artistic skills.

“I used to draw and paint quite often, but there’s something about the three-dimensional aspect of this that makes it more satisfying for me,” he said.

The project began with a search for the base and materials.

“As far as raw materials go, everything is fair game,” he said. “I started with the board itself, which is just construction insulation foam. Then I lay that out and picture in my mind how I want the landforms to be and why,” adding that his artistic vision “changes throughout the creative process.”

Though Rhinehart could have simply purchased some of the pieces he needed from local craft stores, he headed outside for a more authentic feel.

“A lot of the trees and vegetation are real– some of the trees, especially the ones with the roots that are hugging the rots, are from my herb garden. I pulled my basil plants out of the ground, dried them out, cut them accordingly, then glued them in where I needed them,” he said.

The water on the board was also extremely realistic.

“I came across the water in a hardware store. If you’re making a bar or a countertop, you put a hardener and resin together, and when it dries, it appears wet,” he said.

For the entirety of the project, Rhinehart paid painstakingly close attention to every detail.

“I paint everything, and I put layers, washes, and highlights on everything, so it looks like it’s been there for a hundred years or more,” he said.

Instead of portraying a single scene, Rhinehart’s project depicts multiple parts of graveyard-related and horror history.

“There’s a lot of gothic horror aspects, especially on one end of the board, and the other end is more reflective of an ancient burial ground,” he said. “The board doesn’t really go past the 1800s, but I’m sort of bending history to fit my narrative.”

A specific aspect of his research inspired much of the concept — an old-fashioned and historically nuanced graveyard.

“Over time, especially in low-lying natural areas where there’s a lot of water drainage, the ground of something called peat bogs tends to be soft and moist. If a battle happened right there, most soldiers get buried right on the land if they get buried at all,” he said. “Time would continue to put layers of groundwork over top of you, so as the centuries go by, there are layers of dead people, which leads to folklore about these places being haunted. If these places are known for holding the dead, a graveyard is suddenly created.”

Though creating a single scene may have been easier for him, Rhinehart took the time to intertwine multiple story threads into his work.

“There’s so much overlapping and interweaving of narrative folklore, mythology, religion, and history that it was hard for me to keep it linear, so I just decided not to. I thought, ‘This will be fun to just take it all, put it in a basket, mix it around, use my creative sense of what I like from it, and then see what pops up,” he said.

One NASH teacher was lucky enough to be able to see the display throughout its entire research and building process: AP Literature and Honors English teacher Mrs. Rhineheart.

“I’m just glad that he was able to display it, so other people could see it instead of just me in our garage,” she said.