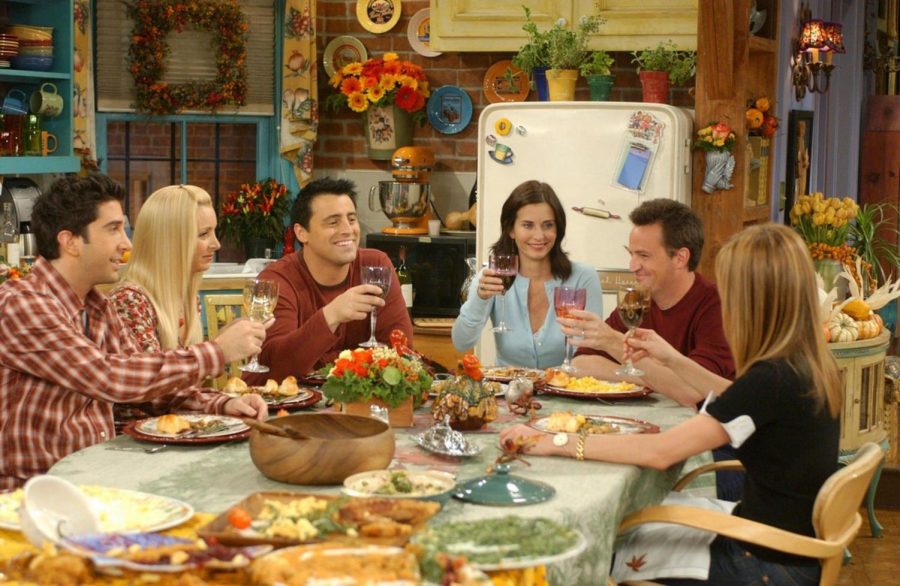 The acclaimed 90's sitcom features nine different Thanksgiving episodes over the course of its ten-season run.

On Thanksgiving Day, people may find themselves watching the Macy’s Thanksgiving Parade or tuning in for a football game. However, I have a personal Thanksgiving tradition that I have been following religiously since I was 13 years old.

Every Thanksgiving, I marathon all nine Thanksgiving-themed episodes of Friends, the classic and wildly popular sitcom that ran for ten seasons from 1994-2004.

With five years of viewing experience under my belt, I feel I am more than qualified to give my opinion by ranking the Friends Thanksgiving episodes.

I understand that the whole point of Rachel’s sisters is that they are annoying, selfish, and spoiled, but Rachel’s other sister, Amy, is just so obnoxious that I physically have trouble getting through this episode. When Amy invites herself over for Thanksgiving dinner with the gang, conflict ensues as discussion over the godparents of Ross and Rachel’s child gets heated. I watch Friends to feel comforted, not to watch familial disputes happen.

Although it was a big deal back in the day that Brad Pitt, who was married to Jennifer Aniston (Rachel) at the time, guest starred in this episode, I find this episode pretty exhausting to watch. Pitt plays Will, Monica and Rachel’s old high school classmate who gets invited to Thanksgiving dinner with the gang. It is soon revealed that Will hated Rachel back in high school as she constantly made fun of him for being dorky, and he started rumors about her which Ross helped to spread. Another conflict-filled episode. Not my cup of tea. I would rather just watch the gang have fun and cause trouble on their own without a third party coming in and stirring the pot.

When it is discovered that Phoebe has been hiding a dog in Monica and Chandler’s apartment, chaos ensues as the gang discovers Chandler’s fear of dogs. As a person who isn’t the fondest of dogs, I personally find this episode very amusing. However, the best part of this episode is the 50 states game, where one attempts to write down all 50 states from memory. It sounds easy, but everybody always ends up forgetting one or two. Ross becomes fixated on the game, and vows that he will not have Thanksgiving dinner until he names all 50. Spoiler alert, he does not have Thanksgiving dinner for a long, long time. Spoiler alert #2: It was Delaware.

The gang convinces a reluctant Monica to host Thanksgiving dinner again, but gets in trouble when they are all late to the dinner due to their own reasons. Rachel and Phoebe enter Rachel’s daughter into a baby beauty pageant, and Ross and Joey get caught up at a Rangers game. The group begs to be let into Monica and Chandler’s apartment, but they stubbornly refuse, resulting in the iconic photo of the four heads peeking in through the door. It’s always fun to watch the gang get themselves in trouble and try to get themselves out.

Things get competitive when the gang decides to play a friendly game of football on Thanksgiving day. However, Monica and Ross’s sibling rivalry is fiery as ever, and what ensues is a very amusing twenty minutes as six very different people of very different athletic capabilities fight their way through touch football. I have never had any interest in sports, but this episode makes me want to gather my group of friends for a game.

After kissing Joey’s girlfriend, Kathy, guilt-filled Chandler decides to spend the entirety of Thanksgiving inside a wooden box to prove his loyalty to Joey. Although the premise of the episode is a bit gloomy, Chandler’s sarcastic comments are even funnier when said from a box. Additionally, what Friends fan doesn’t love a good Chandler-Joey bromance moment?

When Thanksgiving plans fall apart for everybody, it is the gang’s first Thanksgiving celebration together. As a stressed-out Monica attempts to accommodate everyone’s needs, chaos ensues when everyone is locked out of Monica’s apartment while trying to view the runaway Underdog balloon from the Thanksgiving parade from the roof. As the food is all burnt, the gang enjoys Chandler’s homemade grilled cheese and tomato soup, while being grateful that even when everything goes wrong, they still have each other. This episode ranks so high for me for the pure nostalgia and comforting vibe it gives off. It’s what basically everybody wants from Thanksgiving, right? Time with loved ones and cheese sandwiches.

This episode genuinely always makes me laugh out loud multiple times. While Ross and Monica attempt to hide their own big secrets from their parents, Rachel prepares the worst dessert known to history as she mixes a trifle recipe with a Shepherd’s pie recipe. The episode comes to an explosive conclusion as Ross and Monica spill all of each other’s beans and everybody attempts to enjoy Rachel’s heinous dessert. I think this episode perfectly encapsulates not only the chaotic nature of holidays, but also the chaotic nature of the Friends characters themselves.

1. Season 5, Episode 8, “The One with All the Thanksgivings”

Now, I’m not usually a fan of flashback episodes, but this episode is full of pure laughs and delightful moments that I can’t help but love it. The gang all share stories of their worst Thanksgivings, ranging from Phoebe’s past life as a nurse in a war, to when Joey’s head got stuck inside a raw turkey. The stories culminate with a flashback to when Chandler and Rachel were invited to celebrate Thanksgiving at Monica and Ross’s household, and Monica ends up chopping off a part of Chandler’s big toe. All of these stories are so ridiculous that you just can’t help but smile.

No matter which episode you decide to watch, you really can’t go wrong. Friends feels like a warm blanket on a cold night, and there is no better show to watch on Thanksgiving day as you remember to be grateful for your loved ones.