Opinion: The Pitfalls of Positivity

Unrelenting optimism can ironically have negative effects on our lives. 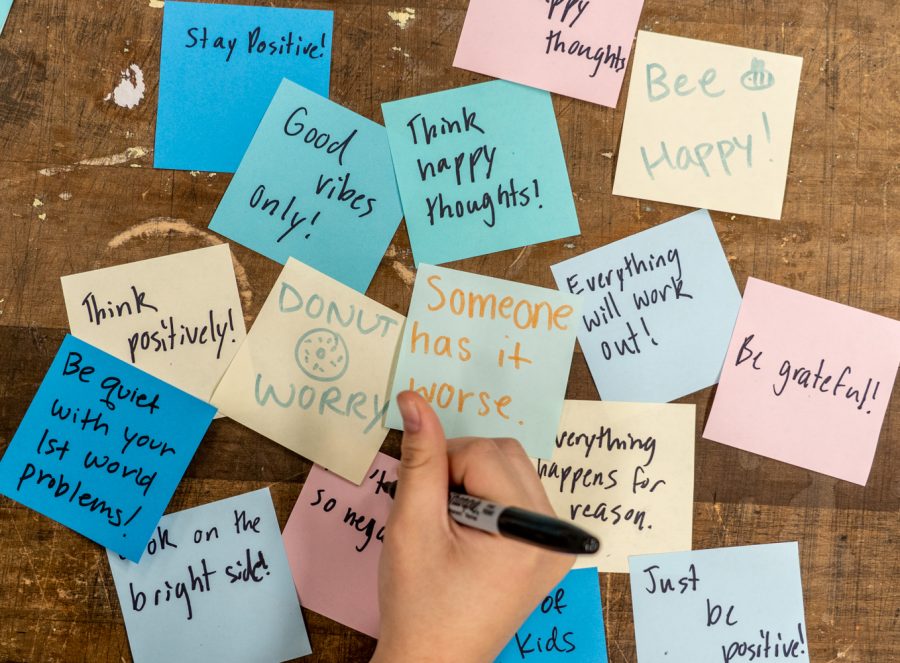 Phrases like these can brush over a person's actual problem, and they can feel dismissive and insensitive.

When I was in middle school, I had an intense hatred towards the song “Happy” by Pharrel. It always seemed out of place in my middle school life, especially when I was struggling with mental health and a perfectionist attitude. To me, it seemed to have the message of, “If you’re sad, just be happy!”

Unfortunately, this is not specific to just one song, or even just one person. Toxic positivity is prevalent throughout society, and a culture of never allowing negative emotions into your psyche is harmful in the long run.

Much of this begins at an early age. We tend to tell our children to banish “bad thoughts” from their heads, preferring to brush them over with phrases like “Look on the bright side!” or  “At least it’s not worse” or most of all “Be grateful!”

While it is important to remain grateful for what we have, it does not usually help in the moment. Whether a person is distressed about grades, mental health, the pandemic, or a myriad of other possible problems, forcing gratefulness usually makes people feel worse. It feels invalidating and dismissive, and the phrase feels designed to only help the person saying it.

As Stephanie Preston, a professor of psychology at the University of Michigan at Ann Arbor, said, “‘Looking on the bright side’ in the face of tragedy of dire situations like illness, homelessness, food insecurity, unemployment, or racial injustice is a privilege that not all of us have. So promulgating messages of positivity denies a very real sense of despair and hopelessness, and they only serve to alienate and isolate those who are already struggling.”

As Preston indicated, the culture of toxic positivity reaches beyond responses to momentary problems. The time in quarantine is an excellent encapsulation of many harmful aspects of the fixation on staying positive. First, at the beginning of quarantine, a message that was shared throughout social media was that the time indoors could be used productively. Many posts advertised quarantine as a time to learn a new language, pick up a new hobby, or to begin a workout routine.

While doing so may have worked for some, often, these messages made people feel guilty about not being productive during their time indoors. The truth is that the pandemic has been detrimental to some and traumatic for most others. For those with mental illnesses or those that are immuno-compromised, quarantine can feel like living off of borrowed time. Sometimes, there is simply not much positivity that one can hold on to.

This is also evident in how we discuss politics. Many people insist on not discussing problems like racism or antisemitism out of a desire to remain “positive”. We see this particularly in discussions about how children should learn histories of oppression.

Just last month, we saw this with controversy surrounding Maus, a Holocaust graphic novel written by Art Spiegelman that was banned in a Tennessee school. The board cited the book’s “unnecessary use of profanity and nudity and its depiction of violence and suicide.” It is important to realize that while Maus may have disturbing imagery, it is true to life. Claiming that a story is “too disturbing” to be told takes advantage of a toxically positive culture and uses it for its own intentions. This is not to say that toxic positivity is to blame for Maus’s and other book bannings, but it is a tool that those seeking to ban stories of oppression can use.

So how do we solve this?

Like any part of society so deep-seated, it takes a lot of time and effort. Changing a toxically positive outlook is often about trying to change an instinctual urge, which can take a while for anyone to accomplish. It begins on a personal level before it gets to a political level, though.

When it comes to smaller, lower-scale problems, one must focus on trying to change behavior, not emotion. Jaime Zuckerman, a licensed clinical psychologist, recommended mindfulness techniques that allow people to identify their emotions and sit with them.

Research has also shown that accepting negative emotions can be more beneficial to a person’s mental health than ignoring them. In 2018, a study researched more than 1,300 adults to find a link between emotional acceptance and psychological health. The study showed that often, those that habitually avoid challenging emotions end up feeling worse.

“While cultivating a positive mind-set is a powerful coping mechanism, toxic positivity stems from the idea that the best or only way to cope with a bad situation is to put a positive spin on it and not dwell on the negative. It results from our tendency to undervalue negative emotional experiences and overvalue positive ones,” Natalie Dattilo, a clinical health psychologist with Brigham and Women’s Hospital in Boston, said.

The best solution, when comforting both yourself and others, is to offer warmth, not positivity. Allow others to have the space to feel their emotions, and don’t try to shut down feelings that you think are “harmful”.

As Susan David, a psychologist and consultant at McLean Hospital in Massachusetts and the author of Emotional Agility, said, “Emotions are data. They are not good or bad. They are signposts to things we care about.”

As psychologist and author of Toxic Positivity: Keeping it Real in a World Obsessed with Happy, Whitney Goodman recently tweeted, “Toxic positivity leaves us feeling alone, and disconnected. It stops us from communicating. It stifles creativity and change. It silences people. It labels things as ‘happiness inducing’ and ‘happiness preventing.’”