StuCo's last event of the school year brought students to Newman Stadium for an outdoor movie. 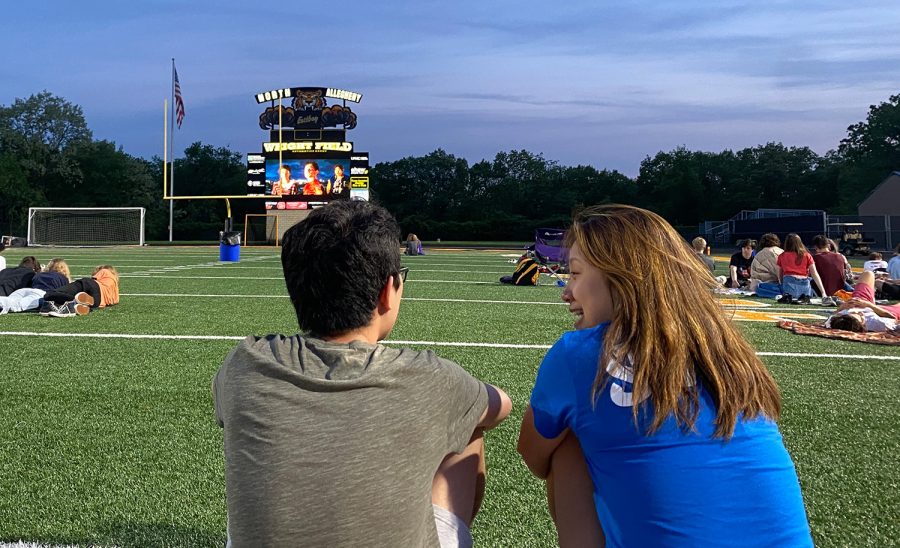 Owen Jin and Victoria Ren enjoy a night of movie-watching on the field at Newman Stadium.

Though the football season has come and gone, the lights of Newman Stadium were once again lit up last Friday night—only the spectators’ eyes were turned toward the screen rather than the field.

After a day of dodgeball during school, students gathered on the football field for a viewing of Spiderman: No Way Home. The event, sponsored by the NASH Student Council, was the second annual “Night at Newman” outdoor movie night.

While the event first took place at the end of the year last year, what some may not know is that the idea was initially born out of an idea for a Covid-safe Homecoming parade.

“Last year when we were actually figuring out how to create a Hoco parade that was Covid-safe but also brought everyone together…. We ended up doing it in the Spring of 2021 and since it went super well we decided to continue the tradition,” said StuCo President Victoria Ren.

Like the previous year, blankets (and in one group’s case, an inflatable pool raft) dotted the lawn, while some students movie-watched with pizza and snacks and others played lawn games and ran around the field. Everything from the seating to the popularity of the movie choice was community oriented.

Indeed, the main theme the night was centered around was bringing together the student body one last time, especially after more than two years of postponements and cancelations at the hands of the pandemic.

“It’s probably one of my favorite events I’ve ever planned just because it is very community-oriented,” Ren added.

Overall, the night was a hit with both attendees and the officers. The hope is that even after this group of leaders moves on from high school, the function will continue to take place in the years to come.

Seargeant at Arms Ben Lindgren said, “The movie night was definitely a success. The weather was perfect for relaxing in the stadium. We hope that this event will become an end of the year tradition at NASH as it continues to gain popularity within the student body.”

And the night was not only an opportunity for students to unwind and have fun as a community; it was also a final goodbye for the Student Council officers to lead one last initiative and cap off their terms.

As Ren said, “I’m really glad we ended the year with that, and I’m super grateful to have served on Student Council for six years of my life and in all of my high school experience.”